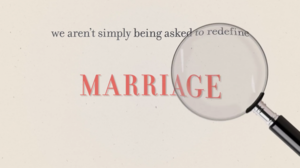 A new video from the Iona Institute on the same-sex marriage referendum.

This Is A Family Show

64 thoughts on “This Just Sin”