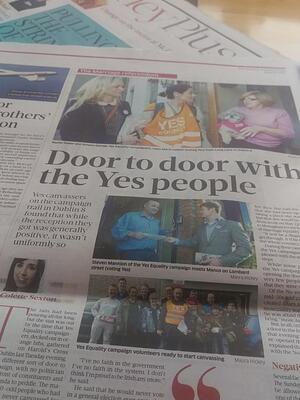 Colette Sexton wrote in yesterday’s Sunday Business Post about how she joined some Yes canvassers while they went door to door in Dublin 8.

She reported that the 60-odd people who had turned out to canvass had never canvassed for anything before.

“… While some people had waved the Yes campaigners away without opening the door, they encountered very few people who said outright that they were voting No. Of the No voters, one man in his mid-50s told campaigners that God created Adam and Eve and thus homosexuality was wrong.

Another said he was afraid that a Yes vote would bring ‘more Aids’ to the country. But, in all, only one person slammed a door in the face of a Yes campaigner that evening, and immediately she reopened the door, apologised and explained that she thought they were with the No side.”

Later in the article, Ms Sexton wrote that several groups from the No side rejected her request to join them while they canvassed, including David Quinn, of the Iona Institute, who said the group wasn’t going door to door as it didn’t have the resources, and the Mother And Fathers Matter group.

“A spokesman for the Mothers And Fathers Matter said that it was refusing to allow any media on its canvass, as it wanted to protect its volunteers from any negative attention. He said that it had also rejected a team from news website Buzzfeed in Washington DC which wanted to come with them on the campaign trail.”

“[Senator Ronán] Mullen, who lives in Galway, said: ‘Out of hundreds and hundreds of people I’ve only met one person that said, “I’m disagreeing with you. I’m voting Yes”….I’m meeting many more No voters than Yes voters…”

One of the core flaws is the deeply hidden fear, based on ignorance of the facts, that voting Yes will allow homosexuals to abuse access to male children.

Cosmopolitan campaigners assume that the majority of people know that gay fathers are already raising boys. Not so.

The Yes side forgets that for many heterosexual people the last few weeks have been both a crash course and steep learning curve on a minority sexual culture.

Far too many of the Yes speakers wrongly assume the majority of our people are au fait with gay and lesbian lifestyles in which children are cherished.

Accordingly, the Yes side should have concentrated on core fears about homosexuals and children during the three television debates.