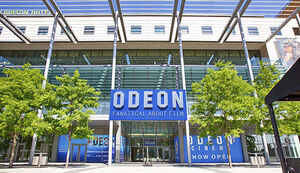 With TWO free passes each allowing three people free entrance to a movie of their choice at the ODEON, Point Village, Dublin, to give away we asked for YOUR best and worst cinema experiences of this year so far.

Although the ‘of this year’ bit ruled out most entries.

Rugby Fan: “Best: Theory of Everything….the film stayed in my mind for a few days. Worst: The clown beside me who thought it would be great to Facebook her mates sporadically throughout. Eventually I told her to turn it off or get the fupp out. We broke up soon afterwards.”

Gary H: “My worst cinema experience so far this year was going to see a film that was due to start at 20:30, we were all set up popcorn, drink, Minstrels and the clock started to tick, 20:35, blank screen, 20:40, blank screen, 20:45, blank screen and then at 20:50 I decided to go out to the lobby (not to get some treats) but to ask why we were sitting in a cinema looking at nothing for twenty minutes after the listed start time. Their answer, THEY FORGOT TO TURN THE FILM ON. Well as I’m sure you can imagine there were quite a few angry customers. We didn’t even get a refund. A shambles. Best cinema trip so far this year was two weeks ago to see The Avengers Age of Ultron. Great Film, Great Popcorn and comfy seats. It was as simple as that and sometimes it’s the simple things that are the best.”

Janie: “Best? a split between witnessing the absolute nerdgasm of a friend on seeing the ‘Batman vs Superman’ trailer in IMAX, and the pure convulsions of laughter and audience participation in Savoy One for ‘Fifty Shades of Grey’ The worst would have to be having the first 30 or so minutes of Blade Runner: The Final Cut ruined because the idiot behind me needed to keep swinging their leg into my chair ’cause they’re tall like, and the chairs were built for dwarves’.”

Funk: “My best cinema experience of the year was seeing Blade Runner on the big screen in the Lighthouse. Something I’ve wanted to do since I got it on a bootleg VHS in the 80s. My worst cinema experience of the year was seeing A Most Violent Year in Omni. Not for the movie, which was pretty good, but because it was shown in a tiny screen with 36 seats. That’s not a real cinema at all!!”

Ray: “Best: The Avengers:Age of Ultron Midnight screening. Was great to see it early before the US release and know it all! Plus the End Credit scene was amazing! Bring on the Infinity Wars!
Worst: Going to see Birdman. My friends all went in ahead of me while I stayed out getting snacks. Rushed back in to make the film in times. Got in and started climbing steps when I got a headrush. Fell backwards and spilled Coke and Popcorn all over myself. Decided to stick out the movie soaking and red-faced.”

Previously: Do You Have Two Friends

Through The Looking Glass

Have You Six Friends?