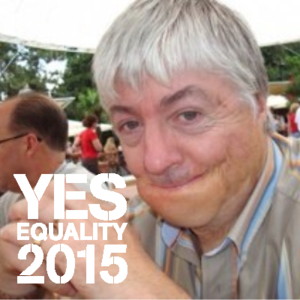 Homosexuals didn’t exist when I was growing up. I never knowingly met one, never really thought about them until I came across the story of Oscar Wilde. To say I was shocked was putting it mildly: I simply couldn’t comprehend two men having sex with one another. And lesbians? Well, you could have knocked me down with a feather.

As I grew older I noticed a few effeminate characters who I assumed – without ever knowing definitively – were homosexual. Television played a large part in how I viewed them. These were guys with exaggerated mannerisms and squeaky voices. Queers in other words. How we laughed at one of our classmates who certainly fitted the description.

I had my own demons to deal with and struggled through life trying to come to terms with my facial disfigurement. I should have had some modicum of sympathy for homosexuals. In my world where I sought to fit in and earn everyone’s approval I joined in the homophobic chatter whenever the subject was raised. Homos – the lowest of the low.

Thirty years ago I met my true love Trish and we were blessed with three children. Daire was the first born and I was so proud to be a father. Alan died after a battle with spina bifida, but before he died along came Sarah Jane.

We watched the kids grow up, helped them through school, and delighted at their achievements. We took a huge interest in their lives and whatever they embraced. We helped them whenever we could and always ensured they never lacked a loving environment. They could talk to us about anything or come to us with their problems. You couldn’t have found a more normal home.

An accumulation of little things had made me wonder for a while if my son was gay. Little things hinted that he might, but it seemed hard to believe. We were driving to the train station to take him back to Dublin one day, but before I could think about how I should lead up to it, the words just tumbled out. “Daire, are you gay?” I asked.

Tears started flowing down his face as he began sobbing, and I had to pull in and stop the car. I told Daire that I loved him, that him being gay didn’t mean I would love him less. I meant every word. I had a lot to learn.

I didn’t want Daire to make the long journey back to Dublin on his own, so I asked him to come home to tell Trish and I would drive him to Dublin later. He was upset and taken aback by events, but when we arrived home he told his mum who tried not to show her surprise, instead hugging and kissing him.

I guess what shocked me more than knowing that Daire was gay was that he looks ‘normal’. I had this mental image of gays looking a particular way, with effeminate mannerisms, but he didn’t conform to our idea of being gay. A million thoughts went through my mind: How did I not notice before? Did I really love him or was I just saying that to stop him crying? The questions flashed through me but there was no time to reflect.

I had work the following morning but rang my boss to say I wouldn’t be in because of a personal matter. Thankfully, he didn’t ask any questions. I was still in shock myself and God knows what I might have said had he asked. We didn’t talk much on the journey to Dublin, but when we did it was about anything but him being gay. I guess we were both coming to terms with the revelation: perhaps Daire wasn’t quite sure his parents were so accepting. For me, it was a sudden transformation. Had you asked me the day before you might have assumed I was homophobic because I didn’t have much time for gays. All I knew in that moment was that I loved my son more than anything in the world, gay or not.

We arrived at Dartry Road where he was living and when we got out of the car he hugged me. I have never been so glad to be embraced. I hardly noticed the road during the drive back because my mind was still trying to come to terms with my new world. I now had a son who was gay and how should I deal with that? Should we tell his sister? What about my parents? How would they react? Our friends?

It’s funny the things that hit you in no particular order, like the fact your son won’t be bringing any girlfriends home, there won’t be any wedding and as for grandchildren… You know, none of that matters really, not when you want your child to be happy. I loved him because he’s my son and not for anything else.

Of course we were worried about Daire. We knew gays were often targeted, that they faced discrimination, even violence. He had barely left Cork for college and he would be all alone. So many fears raced through our minds. Most of all, we worried about what people might think – of him, of us. We were confused and afraid.

My dad was unwell and his memory was fading, so there was no point in telling him, although Trish and I were extremely reluctant to tell anyone initially fearing how they might react. It’s a hard thing to keep to yourself, but eventually we did tell family members. They were all amazingly supportive. Trish told some of her friends, but she would admit to me later that it took her about a year to grow accustomed to the fact her son was gay. I think she mourned the loss of a possible wedding and grandchildren. To be honest, I never thought of that. It would be some time before we got around to telling our daughter, but she already knew – someone at school had told her Daire came out when he was 18.

I don’t know why I waited over a year to tell Mum, but a couple of months after Dad died we were on a trip to London and I broke the news. She didn’t bat an eyelid and said she loved her grandson whether he was gay or not. I couldn’t have been more proud of her.

It’s been a long and sometimes awkward journey being the father of a gay child. I’m comforted by the fact that he had a great bunch of friends at school and that he has built a successful career, but if I’m honest I do worry about him more than Sarah Jane.

For a long time I kept my thoughts to myself at work. I guess I was afraid to say anything. There’s a lot of casual homophobia around, so whenever I heard it at work or on social occasions I wanted to open my mouth, but I stayed quiet because I did not want to be judged. I’m ashamed of my silence. I did tell some colleagues at work, but just a few. Perhaps they told others. I’m gone now so it hardly matters.

I am extremely proud of Daire just as I am his sister, but in today’s Ireland they do not have an equal future. I’m hoping that will change when we vote Yes in the referendum on Friday to same-sex marriage. It’s about giving my children and yours equal rights to marry the people they love, regardless of gender. For Your Consideration: I Am Voting No

31 thoughts on “A Long And Sometimes Awkward Journey”