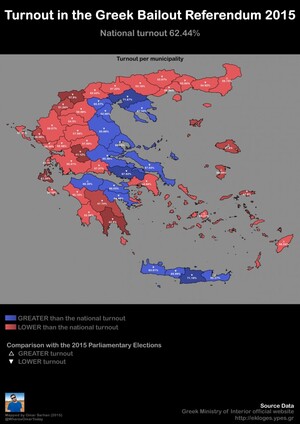 How the Oxi was won.

One of the lines taken in the build up to the referendum was that the Greek people wanted to exercise their democratic rights and a massive decision such as a bailout requires the consent of the people.
In 1975 Greece was one of a minority of countries to introduce compulsory voting, It has always being considered an important affair, up until 2001 there were still provisions in the constitution for penalties and sanctions on absent voters. The spirit of compulsory voting still exists in the constitution even if enforcement is non-existent.
I did expect to see a greater increase in voter engagement, the vast majority of the municipalities had a lower turnout for this referendum than the parliamentary elections that took place earlier this year. It is startling to think that there was increased voter apathy at this crucial moment….

Where In The World?

Omar Gets A Job

35 thoughts on “A Turnout For The Books”