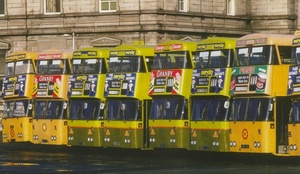 With FIVE free pairs of passes to a Dublin Sightseeing open top bus tour of Dublin to give away, we asked.

But only five were allowed up top.

GlasnevinGuy:; “My favourite Dublin Bus journey has to be 140, top deck on a sunny day. Slip onto St. James’s Street after work, talk to some of the characters outside Tony’s and maybe get a bag of chips and sit on the step if you’ve time. Hop on the bus and, after rush hour, when I usually get out I feel like a king sweeping up James’s Street; look into Christ Church Cathedral sweeping past with people enjoying the sun on the grass or stooped under the arching trees in rain. Coming through the city centre always wakes me up before heading home; seeing what people are heading to watch in the cinema or meeting friends on O’Connell Street. Many’s a time I’ve made it home only to get the 140 back in, to meet a few friends and hop out a little closer to one of the small pubs tucked away off Dame Street. :)”

Fluffybiscuits: “My favourite bus journey? Probably the 76 as it held so many memories for college. I went to college in Tallaght. All my friends lived in Clondalkin at the time and during the summer we would get it up to Tallaght to connect with the 65, so we could get to Blessington. There was a bus driver called Brian I think it was. He was a small grey-haired old man who would always smile and, even in the pouring rain, always made sure there was room on the bus. And if there wasn’t, he’d explain why there wasn’t. Tallaght college holds a ton of happy memories for me. I failed my course but it was not about that as the people I met 15 years ago now remain my best friends in the world and I call them family. I remember bringing a girl I knew called Lisa on a date to The Square [Tallaght] and, being a broke student, I could only afford a cinema ticket and a Happy Meal, needless to say that one date was fairly awkward (I’m a backdoor bandit but was only coming to terms with it at the time, lol!) . The bus brought me to work in Dunnes Stores in [The Mill Shopping Centre] Clondalkin, a job which I loathed and a shopping centre I still loathe to this day! Sitting on top with the lads on the 76 shouting into my phone ‘Yer getting the boat to England, I’m not the father!!, it was one night!’…everyone would earwig and then I would shout “I don’t care even if you are my sister”. Thanks for the trip down memory lane, I’m all nostalgic now…”

Gooch: “My favourite was on a open-top tour bus about 7 years ago. I went on it with a few American friends. Driver was gas and a great singer. Best part was when we passed Heuston Station and he informed us that it was named after the American singer Whitney Heuston. His delivery was excellent and he didn’t let on he was joking, nor did I tell them he was. Still laugh when I think about it.”

Alan:: “My favourite was the 747 to pick up the guy I’m dating, when he came home from the States. Sadly he’ll be leaving the country again soon so what was an especially happy journey will also become a sad one…”

Song Boy Ste: “I used to take the old 46 bus home every Tuesday and Thursday after school, from Stillorgan to Shankill. These were the days when school finished at 4pm and not 3.20pm, how I’d love to work those hours now! And yet the day felt so long back than. The 46 was always a single decker bus, and always had the same regular drivers. Guaranteed a giggle to hear the shrieks of the BOI workers heading towards Cabinteely when a replacement driver would take the wrong turn away from Ballybrack towards Killiney, leaving them stranded somewhere in between. Many’s the day I’d stand with the driver to tell him which route the bus followed…we could have taken that bus anywhere! Nobody ever took the 46, it always felt like it was “our” bus, our very own chariot to carry us away from the humdrum of school and delivering us home earlier than the half past three No. 84 we would get on other days. Home just in time for Da’s burger and chips…cos he was working late that day :)”

All winners will be notified by Dublin Bus today.

You may get about three emails at once.

Previously: I’d Love To Do That

A Shot Of Gordon’s?

2 thoughts on “Route And Tooting”