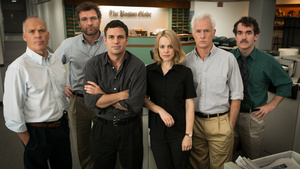 1. A team of Boston Globe journalists investigate the cover-up of widespread sexual abuse by the Catholic Church. True story, yo.

2. That’s a mighty impressive cast. You’ve got Batman, the Hulk, Sabretooth, Dr. Manhattan and Iron Man’s dad. It’s getting hard to find an actor who hasn’t been in a comic book movie.

3. …Or a Catholic priest who hasn’t [TEXT REDACTED]

5. “And the Oscar for best hairpiece in a supporting role goes to… Stanley Tucci.”