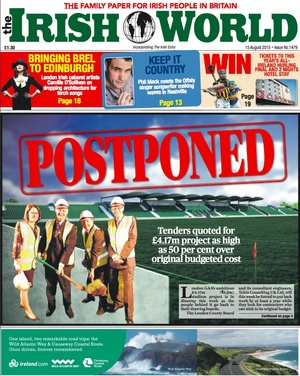 The London County Board and its consultant engineers, Tobin Consulting UK Ltd, will this week be forced to put back work by at least a year while they look for contractors who can stick to its original budget [€4.17 million].

The new stadium, which has been many years in development, was supposed to open by May next year and to be a showpiece, county-level ground for the Irish community in London and in Britain.County London GAA.

It had been hoped that London would have its new stand and ground in time for next year’s 29 May Connacht Senior Football Championship clash with Mayo.

The London County Board has received a commitment of £1.3 million from Croke Park and £500,000 from Ireland’s Department of foreign Affairs and Trade and raised £500,000 itself.

This follows the fiasco of New Eltham [former ground sold to developers] and will be used by some within the [London GAA] Board as a stick to beat those who are trying to welcome a team from the Irish Guards….

The GAA Team With No Irish Players

The Truth Behind The GAA Guy In The Nip

4 thoughts on “It’s All Not Kicking Off”