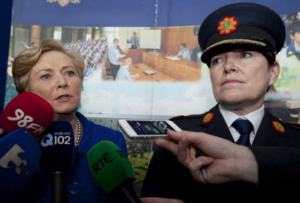 On yesterday’s RTÉ Radio One This Week show, journalist John Burke reported on allegations of wrongdoing made by two Garda whistleblowers.

John Burke: “This relates to serious allegations of wrongdoing within the force that have been made by two young gardai. Essentially their complaints are different though they relate to the same senior garda. Both have made allegations. On the one hand, by one Garda whisteblower that there was serious impropriety in relation to the pursuit of drugs investigations. The other whistleblower has made again, quite serious allegations, in relation to what happened him when he arrested a garda for drink driving. They both say their careers have essentially been ruined in effect by bringing their concerns forward and they did so around the time that there was a great deal of publicity in relation to the Maurice McCabe case and the John Wilson case, where they brought their concerns forward. So that, it seems, emboldened them to bring their cases forward. They went into the process and made their complaints known to senior officers. And they claim, after that, that they suffered as a consequence.

“In the case of the first whistleblower, he went to the interim garda confidential recipient as it was at the time last May, Judge Patrick McMahon and, arising from that, in the summer of last year, approximately one year ago, a senior garda officer was appointed to examine his allegations. They met and at that meeting, the garda whistleblower was represented by a junior solicitor, not his normal solicitor in fact, as far as I understand they wouldn’t have even been known to each other before that meeting. Very shortly, after that meeting, the junior solicitor noticed that their LinkedIn page had been checked out, their profile had been checked out, by the accused Garda. That raised a big red flag for them in terms of whether that meeting with the investigating senior garda, which was supposed to be entirely confidential, whether there was a leak of information and, if that leaked, perhaps what else had leaked? So, at that time, this is the summer of 2014, they wrote to the Garda Commissioner Noirin O’Sullivan and they wrote the the Minister for Justice Frances Fitzgerald and they said they had serious concerns in relation to the potential that information had leaked from this confidential process, back to the accused garda and that they then felt they couldn’t rely on it any further. The Garda Commissioner’s office wrote back to the first whistleblower in this case and whilst, as I understand it, they didn’t deal directly with the allegations made, in terms of whether they accepted them or not, they said that if the Garda whistleblower waited, he could engage then with a new process which was coming in at the time which is in now, the Protected Disclosures Procedure whereby one goes to GSOC as opposed to the Confidential Recipient. So we’ll park that for one moment. That’s the first Garda whistleblower who raised those concerns about information leaking out from his investigation that was overseen by this senior investigating Garda.”

During the show, Mr Burke spoke to United Left Alliance TD, Clare Daly about the situation.

Clare Daly: “What it’s saying is that the old boy network, even though there are two girls at the helm, is absolutely alive and well and the same hierarchy is there defending itself and all of the demands that were very alive a year ago – that we needed to transform An Garda Siochana into a modern police service – are even more valid now because I would actually say the situation internally now is probably worse than when it was under former Commissioner [Martin] Callinan and Minister [Alan] Shatter… For 15 months now [the two whistlelblowers] have been put through hell, and their families have been put through this hell, isolated from their peers. They’re very vulnerable, they’ve been seriously harassed and intimidated and it’s just not good enough.”

Separately, readers may wish to recall how, in December 2014, Independent TD Mick Wallace, at a Banter event in Twister Pepper, Dublin, claimed some senior gardaí were benefitting from the drugs trade in Ireland.

There’s a number of cases where guards take, they capture drugs. We know of a case where drugs were coming in, maybe five suitcases of cocaine might come in and it would be organised to let four through, the guards would catch one suitcase with some chaps that would be heading off in one direction with the suitcase. Their leader was never caught. And the suitcase they would catch, they would bring it and there’d be a big show and the media would be brought down to show, ‘oh, there was a big drugs find yesterday and here’s all the stuff’. The stuff goes back in a box and fellas have come to us and told us that they were dealing in drugs, they were caught by the cops, they weren’t turned in and the cop says, ‘we’ll be back to ya’. They come back two weeks later and say, ‘here, sell this for us and bring us back the money’.

Listen back to This Week in full here

Previously:  The Wrong Side Of The Thin Blue Line

21 thoughts on “‘The Internal Garda Situation Is Probably Worse’”