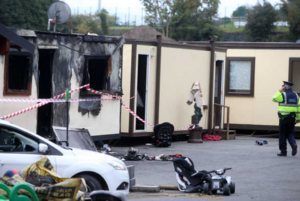 The halting site in Carrickmines at the weekend, following a fatal fire

Further to the fire at the halting site on Glenamuck Road, Carrickmines, Dublin at the weekend, which claimed the lives of five adults and five children, while two injured adults and a child remain in hospital…

“Dún Laoghaire-Rathdown County Council, in whose area 10 Travellers lost their lives on overcrowded halting site at the weekend, is one of 15 local authorities that drew down no funding for Traveller accommodation this year.

Some €4.3 million was provided by the Department of the Environment to the 31 local authorities for Traveller accommodation this year, down from €70 million in 2008. Even in straitened economic times, this 93 per cent collapse in funding raises questions about the commitment of central Government to Traveller accommodation.

Meanwhile, readers may recall how more than two years ago, in May, 2013, the Oireachtas Joint Committee on Environment, Culture and Gaeltacht asked the then Minister for the Environment Phil Hogan to ask why local authorities hadn’t drawn down allocated funding for Traveller housing.

At a meeting of the committee, co-ordinator of Ballyfermot Traveller action project Lorraine McMahon said:

“We contend that a significant non-drawdown of funding or underspend of more than €12 million within Dublin City Council from 2007 to 2012 had an impact on the lack of progress in the delivery of new accommodation. We acknowledge that another barrier to progress was site management issues at various times. There have been some serious issues of anti-social behaviour in the past at various sites but that has not been pervasive across all sites during the life of the Traveller accommodation programme. However, the actions of a minority, which impacted on the majority of the communities, have had detrimental impacts on the community and blocked progress because the whole community has been penalised.”

Ms Joyce told the committee families who reside at the site have no access to electricity, proper sanitation or rubbish collection services. She also said some families have been living there for 15 years.

In addition, Chrissie O’Sullivan, from the Traveller Visibility Group Cork, asked the committee why there was a €6million underspend in the Cork area.

Analysis: Councils must do more for Travellers after fire (Kitty Holland, Irish Times)

Previously: Heard The One About Local Authorities Refusing Money?

A Year On From Carrickmines