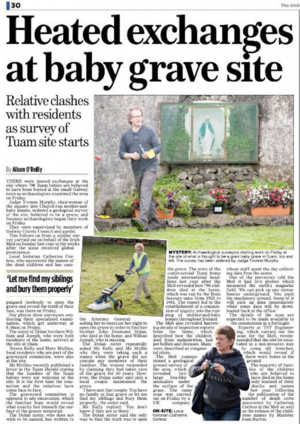 Last Friday, forensic archaeologists carried out a geophysical survey at the former site of the Tuam mother and baby home in Galway, where it is feared 796 children are buried.

The results of the survey, carried out at the behest of Judge Yvonne Murphy who is overseeing the Commission of Investigation into Mother and Baby Homes, are not yet known.

In yesterday’s Irish Mail on Sunday, journalist Alison O’Reilly, who originally broke the story about the Tuam mother and baby home, reported a stand-off between the graveyard committee in Tuam and the families of babies who allegedly died there.

The graveyard committee doesn’t want any excavation to take place while the families feel, if they’re ever to find out what happened the children, the site must be excavated.

You may recall a special investigation in June, by Irish Examiner journalist Conall Ó Fátharta, into the Tuam mother and baby home in Galway which was ran by the Bon Secours Order of nuns.

Mr Ó Fátharta discovered that two years before historian Catherine Corless, in 2014, raised fears that nearly 800 infants may have been buried in an unmarked mass grave at the home, in 2012, a HSE West social worker had expressed concerns that up to 1,000 children might have been trafficked to the US from the home in “a scandal that dwarfs other, more recent issues with the Church and State”.

The social worker came to the conclusion after she examined both the Tuam and Bessborough mother and baby homes while preparing material for the Magdalene laundries inquiry in 2012, led by Martin McAleese. The details were not included in the McAleese report.

Her reports into both of the homes noted the number of deaths recorded at the homes and proposed the possibility that death certificates might have been falsified in order for children to be “brokered into clandestine adoptions”.

“This may prove to be a scandal that dwarfs other, more recent issues with the Church and State, because of the very emotive sensitivities around adoption of babies, with or without the will of the mother.”

“A concern is that, if there is evidence of trafficking babies, that it must have been facilitated by doctors, social workers etc, and a number of these health professionals may still be working in the system.”

Mr Ó Fátharta reported that, in an internal note from a teleconference in October 2012, with then assistant director of Children and Family Service Phil Garland and then head of the Medical Intelligence Unit Davida De La Harpe, it was recommended that the then Fine Gael Health Minister Dr James Reilly be informed with a view to launching a State inquiry.

In light of the survey beginning on Friday and the information discovered by Mr Ó Fátharta, Philip Boucher Hayes, of RTÉ’s Drivetime, on Friday evening spoke to both Catherine Corless and lawyer Kevin Higgins, who represents some families of former residents of mother and baby homes and who has previously pointed out that Attorney General Máire Whelan has the power to order a coroner to hold inquests into the deaths of any remains exhumed at the Tuam site.

Philip Boucher-Hayes: “Kevin is excavation what your clients want?”

Kevin Higgins: “I think it probably is. The single thing that will bring satisfaction, closure, finally, to all the people affected because you’re not going to know precisely what is happened until there is a proper, forensic examination of the site. And that will only happen by a sensitive and careful and methodical excavation. There really is no other way.”

Boucher-Hayes: “Because there is the possibility for many I presume that their brother, sister, son, daughter, whatever, may have been sold into adoption or, equally, may have been buried in this site – they just don’t know.”

Higgins: “Indeed, that is absolutely true. And you referred earlier to a document which records a conversation and conference, between senior members of the HSE in 2012. That document is particularly damning because it records that the HSE knew exactly what had gone on in Tuam, it records…”

Boucher-Hayes: “It doesn’t record or suggest that they knew anything about the graves..”

Boucher-Hayes: “But it does reveal other shocking practices on the part of the nuns.”

Higgins: “It does reveal quite shocking practices. There is no question about that. But of course…”

Boucher-Hayes: “Such as? Can you itemise them for us?”

Higgins: “In what respect, Philip, sorry?”

Boucher-Hayes: “There is suggestion in this document isn’t it, upon examination of the files that were passed to the HSE by the Bon Secour Order that it may be possible, in a number of cases, that the nuns continued to demand a maintenance payment from families when the child was either dead or had gone elsewhere.”

Higgins: “That is absolutely true. One must pay tribute to, in particular, I won’t name the individual, a most conscientious and compassionate social worker in HSE West, who no longer works for the HSE or Tusla or any State body connected with this, who without any funding or direction, or encouragement, undertook a systematic review of the material, passed on by the Bon Secours, and produced the evidence of this, these most distressing and appalling practices by the Bon Secours.”

Boucher-Hayes: “And if I could just, briefly, itemise them. We’re talking about up to 1,000 babies that may have been sold into adoption, as I say, maintenance still being demanded by the nuns even though the child was dead. There was also a concern expressed by these officials in the HSE that this practice of selling babies could only have been facilitated with the knowledge of doctors and social workers and some of whom may still be working now. Now what happened on the basis of this crisis that, they themselves, said was going to be a scandal that would ‘dwarf all others’. What action was taken on foot of it?”

Higgins: “Well, remarkable, as it might seem, nothing. And if it were not for the work of Catherine Corless, it is possible that this material, these records would remain lying, gathering dust. The effect of that teleconference was that it was agreed that an early warning memo would be sent upwards to a most senior official within the HSE with a recommendation that it go directly to the minister. The minister, of course, at that time was  Mr James Reilly. I have absolutely no doubt, from my knowledge of the people who participated in that conference, that such a memo did go upwards in the chain of the HSE, to a senior official. But, as we know in recent times, Minister Reilly said he never had sight of it, simply because it was deemed not appropriate to pass this information on to him because the process of research which HSE West was engaged on was specific to the work of the McAleese Inquiry into magdalene homes. And therefore, these appalling practices which were carried on by the Bon Secours in Tuam were deemed redundant to that process and were simply buried.”

Readers may recall that, according to figures obtained by The Phoenix, under the Freedom of Information Act earlier this year, Fine Gael’s James Reilly paid The Communications Clinic nearly €60,000 between 2012 and 2014  – out of the Oireachtas fund, called the Special Secretarial Allowance (SSA).

In addition, readers may also recall how two weeks after Catherine Corless’ concerns about Tuam were reported in the Irish Mail on Sunday, on May 25, 2014, media queries to the Bon Secours nuns were suddenly fielded by The Communications Clinic.

Finally, readers may recall how, in the summer of 2014, French documentary maker Saskia Weber tried to access members of the Bon Secours Order who ran the Tuam home.

Ms Weber received a letter from Ms Prone in which she wrote, among other things:

“If you come here, you’ll find no mass grave, no evidence that children were ever so buried, and a local police force casting their eyes to heaven and saying “Yeah, a few bones were found – but this was an area where Famine victims were buried. So?”

SPECIAL INVESTIGATION: Fears over ‘trafficking’ of children to the US (Irish Examiner, Conall Ó Fatharta)

All In The Family

All In The Family

‘They Are Keeping Us Down By Denying Us Justice’

20 thoughts on “Meanwhile, In Tuam”