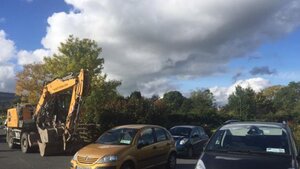 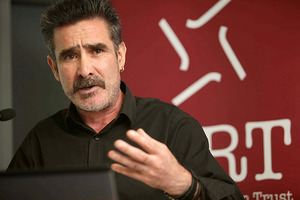 Cars block a JCB from working on a site earmarked for the Travellers left homeless by a fire at a halting site in Carrickmines at the weekend; and Martin Collins

Further to the blockade at Rockville Drive in Carrickmines, Dr Gavin Jennings spoke to Martin Collins, co-director of Pavee Point, this morning on RTÉ’s Morning Ireland.

Dr Gavin Jennings: “Those who were left homeless, by Saturday’s halting site fire, where are they now?”

Martin Collins: “Well, first of all Gavin, over the years, I’ve had my disagreements with Dun Laoghaire Rathdown County Council but on this occasion I really have to commend their leadership, their courage and their sense of urgency in finding alternative accommodation for these homeless Traveller families. So I think they must continue that courage and that leadership even in the face of such adversity and hostility from those local residents. I also want to commend the support of the wider community in Carrickmines and indeed in Sandymount at the surrounding areas. This small number of people involved in the blockade are certainly not representative of the wider community who have shown great support and solidarity to these Traveller families in their time of stress and need. I have to say, Gavin, I mean, I’m 30 years involved in the Traveller struggle, I’m 48 years of age, I’m on the the planet, for 48 years, as a Traveller man, I have never witnessed such depth of hostility and hate towards my community as I have on this occasion. I think this small number of individuals in this estate are completely and utterly void of any humanity and any compassion. And I think their actions are only compounding the stress and the trauma that these Travellers families are already enduring. And I think any right, decent, sensible, fair person looking at this situation, would see it that way.”

Jennings: “So those who have been left homeless, where are they now Martin? Because some, most of these, are relatives of those who were killed. Isn’t that right?”

Collins: “That is correct. I suspect Gavin that maybe they’re staying with family members, you know, in a kind of make-shift arrangement, a temporary arrangement. By no means satisfactory.”

Jennings: “Has that been since Saturday, Martin? They haven’t been staying on the site since the fire, have they?”

Collins: “No, I, I honestly don’t know where they’re staying but I suspect they would be staying with extended family members. Others might be staying in temporary accommodation, offered by Dun Laoghaire Rathdown, maybe some hotel rooms. But this site that Dun Laoghaire Rathdown has earmarked will take care of their medium-term needs until a longer-term solution is found. I would urge the residents to reflect on their actions and the stress and the trauma that they’re adding to these families’ lives. It’s just, it’s unbelievable and it’s unacceptable.”

Jennings: “Martin we couldn’t get any of the residents to speak to us on tape or on the programme. They had told our reporter who was there yesterday that one of their primary concerns was that while the council were telling them this was going to be a temporary solution, they feared how long termporary would be. Now, given that the site where the fire happened, was itself only supposed to be a temporary location, that, and correct me if I’m wrong, turned into a, it was there for seven years. Can you understand their concerns?”

Collins: “I think that’s an absolutely fair point. I can understand where the residents are coming at, from that perspective. But I think, you know, it’s not beyond solicitors or the legal systems’ ingenuity to develop a contract that is water tight that this site would exist for a particular period of time. There’s ways and means around this Gavin. But I do appreciate the point that’s being made in that regard because I know myself from working with different county councils across the country, when you do develop sites, it’s meant to be temporary, two or three years, and the next thing we know it’s there 25 years. So I do accept that point. And I’m not suggesting that this site would be there for any long period of time. This is an immediate emergency. We need an immediate solution so Dun Laoighaire Rathdown have time then to locate a site that would be a long-term solution to meet the needs of these families. So that’s how Pavee Point sees it and we would encourage Dun Laoghaire Rathdown County Council to continue to find a site and we really commend their courage and their sense of urgency. And I would urge the residents, at even this late day, to search deep inside their conscience and ask themselves, you know, is this right? What they’re doing? And I’ll think they’ll find it is not right and I’d say they’re only adding to the pain and suffering that these families are already enduring.”

‘They Have Agreed To Continue Discussions’