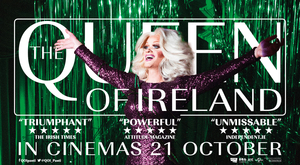 The Queen of Ireland has been in the works since June 2010, but when Pantigate hit the fan last January, director Conor Horgan must have thought that all his Christmases had come at once.
Without that brouhaha and the ensuing fallout, Horgan’s documentary on Rory O’Neill would still be a fascinating insight into one of Ireland’s most glamourous outsiders. And O’Neill is every bit as witty and erudite as you would expect (“You lesbians and your good skin – it must be all the hillwalking”). He’s also remarkably candid about his reluctance to be seen as a LGBT figurehead. But Horgan’s film has of course taken on added significance in the wake of the changes of the last 12 months.
The Queen of Ireland isn’t just about O’Neill/Panti. It’s about us. It’s about where we are as a society in 2015. We have a proud history of getting stuff wrong – from The Voice of Ireland to careerist politicians – and we’re quick to put ourselves down before someone else does it first. But when we do get something right, like the monumental marriage equality referendum, then we should celebrate it. Horgan’s film marks an end and a beginning. It’s a gravestone over the bigotry and closemindedness that blighted past generations, and the tentative first steps towards a more enlightened period of compassion.
If RTÉ have any sense, this will be scheduled against that other queen’s annual Christmas message. But whether you watch The Queen of Ireland on TV, at the cinema or download it, just watch it. Your Nan is going to hate it though.

The main selling point of this old-fashioned road movie is a superb turn from Ben Mendelsohn. As chronic gambler Gerry, the chamois-faced Mendelsohn combines the look of a homeless Martin Short with the barely-concealed desperation of Paul Giamatti. Gerry is one of life’s losers, never knowing when enough is too much. A sustained losing streak ends unexpectedly when he meets the chatty Curtis (Ryan Reynolds) at a fleapit poker tournament. The two form an unlikely friendship and, with his new good luck talisman in tow, this odd couple travel from Iowa to a life-changing poker tournament in New Orleans. For the most part, Mississippi Grind is a modestly satisfying character study, but some elements of Boden and Fleck’s script don’t scan. What the handsome, charismatic Curtis sees in Gerry is never entirely clear, and Mendelsohn’s honest portrayal of an insidious addiction to gambling is undone by an implausibly disingenuous resolution.

Logic or credibility isn’t really to be expected in a Vin Diesel vehicle about a flame sword-wielding 800-year old witch assassin named Kaulder, but any decent fantasy should at least try to convince you of its absurdity. The writers of this nonsensical drivel can’e even convince themselves, seemingly adopting a roll-your-own adventure approach to plot with some eight-sided dice. The Last Witch Hunter has the unmistakable whiff of making stuff up on the fly.
A fairly major plot point involves assembling the ingredients for a recipe, and it feels like sitting through the technical challenge segment of Bake Off. Rose Leslie and Elijah Wood provide nothing but exposition as they compete for sidekick status. Leslie wins, but it’s a hollow victory. Ólafur Darri Ólafsson is a placeholder villain with the charisma of a non-speaking extra, and Michael Caine seems to have reverted to picking projects based on the paycheck. Still, this one might have paid for a swimming pool, and he does get to sleep through most of the movie. I was quite envious. The Last Witch Hunter is the sort of guff that Arnold Schwarzenegger was coming out with back in the 1980s, and that’s exactly where it belongs.

SPECTRE is released on Monday 26th and will be reviewed over the weekend (Mark is watching it this afternoon).

Also on release from today, Friday October 23: THE LEGEND OF LONGWOOD; MAYA THE BEE.