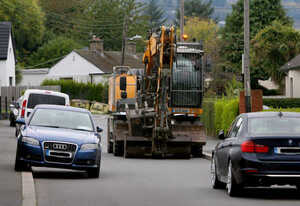 Why do our leaders reflect rather than lead public opinion?

How do you cope with extreme views on the doorstep?

I paid one of my increasingly infrequent visits to Leinster House recently. I was working close to there, and it was a convenient and useful place to break between appointments.

I had a coffee at the dock at LH2000. A number of people passed, from varying shades of what passes for political opinion in this country, to share how do’s.

The longest chat was with a member of the fourth estate, one of the better of that fraternity. I mentioned I was surprised that the Taoiseach had seemed to have gotten away with his comment that members of the ‘general’ public should be consulted with before members of the travelling community are moved to their area. This led to an interchange on whether politicians were meant to reflect or lead public opinion.

He said it still shocked him that when he did pieces, accompanying politicians on canvass, how widespread racist and ethnically challenged views were spoken at the doors. The response of the politicians, of all hues, was always an embarrassing silence, lest the person who produced such bile be ‘offended’.

Of course none of these encounters or the empty responses were ever reported. I can understand why, but it is shameful that the etiquette continues to be practiced. I too have bitten my tongue too many times when I should have challenged. These are attitudes that sadly remain all too prevalent. They exist through ignorance and can only be banished as and when the political system, and the media, tackle their existence head on, showing the holding of these views to be virulently anti social.

I tried to compensate in my last general election campaign. I knew then that being elected was the slightest of possibilities. At the doors I told whoever came up with such hatred what I thought of what they thought.

My canvassers weren’t comfortable with this approach, but I didn’t think it was possible to dig any deeper political holes for myself or The Greens in 2011.

The traditional maxim of most Irish political leaders – these are my people I must follow them – needs to be well and truly buried. With it should be the axiomatic fear in Ireland that practicing ‘leadership’ can and does result in a lack of support, that further brings about a failure to achieve political power.

Some might argue that only when in power can such views be challenged, hopefully to be changed. This is another of the conceits of Irish politics. The same fear that exists when seeking power remains inculcated when attempting to maintain power.

The practice of political correctness is a myth. It exists only in a general sense, rarely in relation to one on one face to face conversations. Until it can do ignorance will continue to predominate.

A running joke in TV series ‘Yes Minister’ was when civil servants told government ministers their proposed actions would be ‘courageous’, meaning precisely the opposite. The term ‘leadership’ has developed similar oxymoronic connotations in our modern political lexicon.

129 thoughts on “Once Bitten Twice Shy”