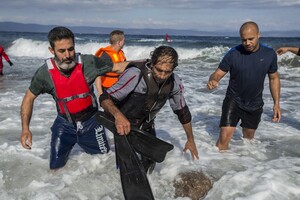 Volunteers, left and right, bring a man ashore after he was rescued in Lesbos, Greece, before he was brought to a police station in Molyvos

Olga Cronin, currently in Eftalou on the island of Lesbos, Greece, writes:

Around lunchtime on Saturday, a group of volunteers had just finished bringing in a boat of refugees along the dirt road between Eftalou and Skala Sykaminia in Lesbos, Greece, when a local man came running, shouting for help.

He had spotted what looked like the remains of a dinghy appearing and disappearing in the rough white-tipped waves of the Aegean Sea and believed there was a person in it.

Several volunteers from different organisations followed the man and searched for the dinghy. When they did spot it, it was too far out to do anything.

From the cliff edge, a photographer took a picture of a black blob bobbing in the distance and the grainy image showed a man hanging on to a section of black rubber, his arms stretched out either side, Christ-like.

Two lifeguards from Spain’s Proactiva Open Arms rescued the man on a jet-ski and dropped him off around 20 metres from the shoreline where the volunteers had assembled and waited to offer him help, some standing by with gold emergency blankets and water.

But as one volunteer jumped in to help the man out of the water, what appeared to be the start of a happy ending – just days after a boat believed to be carrying up to 300 people sank and a day after several bodies of naked men, women and children washed up on the shores of Lesbos – quickly turned into something very ugly.

The volunteer then dragged the man ashore, hitting him intermittently. The man was dressed in a wet suit, life-jacket, had a black bag strapped to his back and clutched a pair of flippers.

As a pack of photographers started to gather at the shoreline, the volunteer yelled that he had helped a dinghy of refugees arrive safely earlier in the day and that a man, who stayed on the boat, had attempted to head back to Turkey using the same boat he used to reach Lesbos.

The volunteer said he was certain this was the same man who had just been rescued.

He then claimed that, after concluding the man was a smuggler from Turkey, he stabbed the boat. This resulted in the man being washed out to sea and clinging to the remains of a dinghy.

As this volunteer dragged the man out of the water, several other volunteers joined the mob. They shouted at him, hit him, kicked him in the back, slapped him in the face, telling him, ‘go back to the sea, go back to Turkey.’

One volunteer shouted at him, saying he was a murderer, another roared that he was Satan, another threw stones at him.

The man, who was made sit on the rocky shore, shivered as the shouting, hitting and slapping continued. The situation intensified when one volunteer started to go through his bag and pulled out jewellery, a knife and even an empty SIM card holder. ‘This is what he stole from refugees,’ one volunteer told the photographers surrounding him.

Meanwhile, several other volunteers tried to calm the situation with one remarking, ‘The only reason he’s still alive is because photographers are here.’

One volunteer tried to tell the men to stop hitting him, telling them the fate of the man was not up to volunteers, another put an emergency blanket around the man and another tried to call the Greek police.

The stand-off between the volunteers who wanted to harm the man and those who wanted the police to handle the situation continued for some time.

As nobody answered when the police number was called, one volunteer – who was trying to prevent the man from being hurt – suggested that he drive the man to the police station in nearby Molyvos and that one of the men who hit the alleged smuggler should accompany them. A volunteer with a video camera and a photographer also drove to the station with them.

The volunteer who drove to the police station later said that the man was taken inside for questioning and that they could hear him being beaten as he was questioned.

The current status of this man is not known as of today, but a query has been placed with the General Secreteriat of Information in Lesbos.

This is what’s happening in Lesbos.

As the UNHCR and EU continue to coldly turn a blind eye to the utter chaos consuming this short stretch of coastline, untrained volunteers are not only trying to fill the void created by the absence of professional expertise – by making well-intentioned but dangerous attempts at being lifeguards, nurses, crowd controllers and trying desperately to provide food, water, clothing and shelter to thousands of people every day – some are now trying to be judges, juries and, chillingly, executioners.

A statement from the Secretariat General of Information & Communication reads:

On 31/10/2015 a 43-year-old Turkish citizen was arrested by Mytilene police officers in an area of Mytilene because he was not in possession of the documents required for him to stay in our country according to law number, etc.

In application of law, etc., on 3/11/2015 the director of Lesvos police issued a decision to return him to his country of origin and he is being held until the return process is completed.