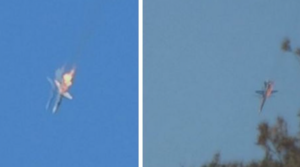 “Habertürk TV reporter on the scene said that the aircraft “turned into a fireball.” Numerous witnesses wrote on social media, saying thick plumes of smoke have been rising from the jet crash site.”

“…A Turkish military official told Reuters the jet was warned before being targeted. The official added that the plane was shot down by Turkish F-16 fighter jets.”

36 thoughts on “Meanwhile, In Syria”