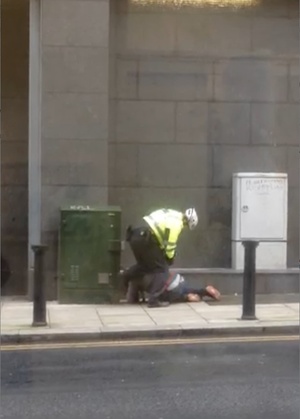 This took place at 11am. No visible provocation from the homeless man. Garda afterwards claimed he was resisting arrest and was apparently warned he would be pepper sprayed. He had been told to move on and was slowly packing away his things. He sleeps here regularly opposite our office and has never been any trouble. He was taken away in a van a few minutes later.

It’s worth noting that a few days ago, when the same homeless man was being harassed and threatened with stabbing by another man we called the Gardaí and they never showed up…

What occurred before filming?

The man was asleep in his sleeping bag and was woken up by a garda, they talked for a minute and then the guy got up and started slowly putting away his stuff. The garda looked impatient and seemed to be encouraging him to hurry up. After a few minutes of this some verbal argument seemed to happen, and the garda took out handcuffs and showed them to the guy, shaking them. The garda then seemed to call for backup, and a van turned up shortly after the video was shot.

They continued to argue, but there was no physical contact from either party. The garda seemed to be leaving, the situation seemed defused. After moving about 30 feet up the street the garda turned back looking aggressive, and that prompted me to start filming. The garda took out the pepper spray and the rest is what you see in video. We couldn’t hear anything through the glass but the guy didn’t display aggressive body language. My colleague and I confronted the garda after the fact and the first words out of his mouth were “I suppose you want to make a complaint.”

This Is Not A Crisis. It’s A National Emergency