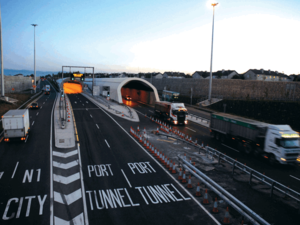 “Dublin music radio station Radio Nova is preparing to take legal action against Transport Infrastructure Ireland, the operator of the Dublin Port Tunnel. The legal action will challenge TII in relation to the fact Nova’s programmes cannot be heard in the Tunnel. Only seven radio stations are broadcast in the Port Tunnel due to limitations in its current system. Radio Nova is not one of them.”

“Radio Nova claims the restriction is in breach of EU competition regulations and the 2002 Competition Act and that it is “inherently unfair and damaging” to its business.”

“… In what may prove to be a controversial view, Nova is also claiming that the Port Tunnel’s system for communicating with motorists in the event of emergency is “fundamentally flawed” and that it has shown favouritism to Denis O’ Brien’s Communicorp in the broadcasting of his radio stations within the Tunnel.”