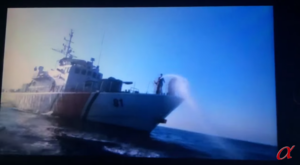 A video of the Turkish Coastguard water cannoning a dinghy full of refugees as it attempted to travel from Turkey to Lesbos island, Greece last October

You’ll recall the €22.9million that Ireland is contributing to the €3billion the European Council is giving Turkey to “stem the flow of migrants to Europe”.

Solidarity group Platanos, which is based on the north of Lesbos island, Greece, reports:

The refugees that arrived Wednesday at Platanos Camp, were soaking wet and in shock because, as they explained to us, the Turkish coastguard tried to force them to return to the Turkish coast with the use of threats, by creating artificial waves and by the extensive use of water cannons.

Two of the boats returned to the Turkish coast with all the passengers in shock. The remaining two boats managed to break through and reached Skala Sykamias, Lesvos.

[On Thursday] at 3 o’clock in the morning, the Greek Coastguard attempted to stop a new boat from reaching the coast at Skala Sykamia resulting in havoc, and the boat almost crashed on sharp rocks. The accident was prevented at the last moment by the intervention of the rescue boat belonging to the team ‘Sea Rescue’.

[On Thursday] morning, the Turkish coastguard was sighted from the ‘Korakas’ Observation Post repeating its deliberate attacks against boats in the middle of the sea, again by the use of water cannons.

We Can Bus The Refugees To Greece