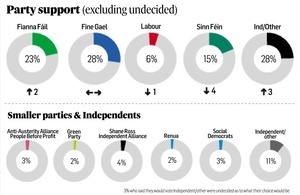 More polls than you can shake a stick at.

What do they all mean?

You wait a few days for a poll and then four of them come along all at once on a weekend. Dramatically enough, a B&A poll was leaked early showing Labour at 4%. The party’s analysis that this poll is “an outlier” probably rings true – no poll has yet seen them near that low. But this soon to polling it may prove to be a bit of self fulfilling prophecy and drag Labour down after  a sclerotic campaign.

There seems to be a steady climb for Fianna Fail who are now comfortable in the mid 20s. This coupled with the inability of the current coalition to reach a majority would make an ara-sure-it’s-grand-coalition between the two civil war parties considerably more likely as it would be more possible for Fianna Fail to make a deal with the blueshirts as equal(ish) partners.

All polls seem to point to a high vote for smaller parties and groups, if this is replicated on polling day will be important not because they may win more seats (though they might) but because of what happens to their votes when they are eliminated.

Given the very high level of support for small parties that don’t really stand a chance in a lot of constituencies they are standing in, data on where 2nd preferences might go is needed more than ever. For example, would Social Democrat voters (3-4% nationally) be inclined to transfer to the Greens (4%) thus perhaps putting them into contention in some unlikely areas? Or vice-versa.

Two out of four polls out this weekend show Fine Gael on 30%. Across the four of them we see the two coalition parties on an average of 35%. Sinn Fein seem to have peaked in the mid to high teens. Which may be disappointing for them. They have struggled with transfers in the past and the PRSTV system is very hard on a ‘Marmite’ party like theirs.

Of more interest at this stage is the emergence of various constituency level polls including, but not limited to, the series conducted by TG4 that’s concentrating on Gaeltacht areas.

Their poll in Kerry shows the Healy-Ray brothers as uncrowned kings of the kingdom on a combined total of 37%. It has particularly alarming results for Sinn Fein’s Martin Ferris, one of the parties big household names of the past few decades, on a mere 8% and just barely in contention for a seat.

The Shinners will be relieved to see they are on track for two seats in Donegal. Similarly, a poll in Mayo shows Fine Gael in the running for an astonishing three out of four seats.

The weekend’s Irish Times poll shows a huge change in support amongst farmers. At the start of the campaign Fianna Fail had a strong lead now Fine Gael has a commanding 47% of their support and this may figure in rural constituencies.

Another astounding figure from the same poll shows 41% of voters in greater Dublin will not vote for any of the main four parties.

The main take away from these results is that there are wild deviations from national polls at local level. The old maxim that this is really forty very separate local elections rather than a general election may be ringing true.

Irish elections have a habit of sorting themselves out in the last seven days or so. Bertie pulled it out of the fire in 2007 and Dick Spring sprang (see what I did there) to 19% in 1992.

One Day On The Trail