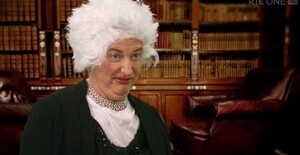 Did you stay in last night?

I am surprised you haven’t mentioned the highlight of the campaign so far. RTÉ partially redeemed themselves last night for their abysmal, biased, fearful general election coverage (don’t get me started)  thanks to Apres Match. The uncanny Terry Prone take off [at link below], in particular left me, well…prone…..credit where it’s due, fair play in fairness, etc, etc.