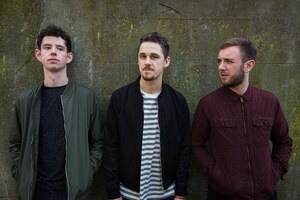 My Tribe Your Tribe – Garden Song

01. Kildare alt-rockers My Tribe Your Tribe have just released new single Garden Song this past week, ahead of an upcoming 4-track EP this May.

02. The trio had a busy 2015, with festival appearances all over the country, including Other Voices, Electric Picnic’s Body & Soul stage, Hard Working Class Heroes, and others.

03. Garden Song is a move into more indie/alt-inflected territory, following a 2015 of synth-informed singles. It’s also a tad bit more of a mover than big, sweeping pop tunes like Ghost With You.

04. They’re playing the Sin É in Dubland tomorrow night in a free show, ahead of a run of single-launch shows around the country: Thursday March 3 at Monroe’s in Galway; Saturday March 12 at the Village Pump in Rathangan, Co. Kildare; and Sunday, March 13 at the Crane Lane Theatre in Cork.

Verdict:  Slowly demonstrating an ever-increasing range of influences and reference points, My Tribe Your Tribe are ones to watch for fans of the greater indie-&-alternative oeuvre.

My Tribe Your Tribe