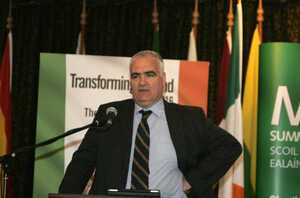 Time to train the Army to drive the Trams, this is blackmail https://t.co/umWBvkb8ZC

I have been struck by just how hard a time the Luas drivers have been getting. This culminated yesterday in a Twitter spat between myself and [political analyst and Irish Times columnist] Noel Whelan (above)who essentially called for the army to be drafted in to drive the trams in place of striking workers.

He claims to be on the side of the users but when I asked him if he would accept that Transdev were taking advantage of our shoddy laws and were irresponsibly playing out a game in public he essentially labelled me juvenile and disengaged. Welcome to Ireland, the place where the only criteria for being seen as a champion of equality is a YES Equality badge.

WRC Invites Both Sides In Luas Dispute To Talk