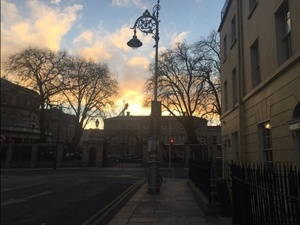 The opening of a new Dáil today contains the possibility of real change.

Unlike the Mother of Parliaments, from which we have inherited many unnecessary and often silly procedures, the opening of our parliament lacks the pompous pageantry in which Westminster seems to revel.

The opening of a new Dáil is more like an All Ireland final day. Crowds of supporters there to support their team. Knowing glances and nods being cast in the direction of those famous players from previous championship finals. Those most known for their fouling seeming to be granted a perverse level of respect.

On my first day my Mother found herself in the visitors’ gallery sat next to Gerry Adams. Then he was still member of parliament and assembly member for West Belfast.

He began the dialogue. “You have someone here belonging to you Ma’am?,” he burred as if he were an Irish Clint Eastwood. She replied with appropriate maternal pride that it was I, Dan Boyle of the Green Party. The conversation, having been polite, friendly even, didn’t continue beyond that exchange.Retrospectively I would have liked The Ma to have reached the question “What was it like in the IRA, Gerry?,” .

There has rarely been any uncertainty in relation to any of this. The changes that could have been made have been studiously avoided. The opening of this new Dáil contains that doubt, a doubt that probably hasn’t existed since 1948. This uncertainty may mean that real change can at last happen.

Let’s hope so. It would be nice to see all TDs being truly equal. A Ceann Comhairle who insists that members of the Executive give answers to questions asked not mere responses.

A parliament where legislation drafted is informed by the contributions of each member who speaks in debates, and who when offering amendment to the legislation will only be impeded by the quality of the argument they make.

Committees would see research and pertinent questioning being rewarded, with grandstanding being derided as the loudest sound from the emptiest vessel exercise it is. We may even see senior civil servants emerge from the shadows to have accountability applied to them for their role in the decision making process.

Public appointments would be made through reformed committees, where applied experience rather than implied patronage would see the right, or at least more properly accountable, people being appointed.

In 2002, on our first day, Eamon Ryan and I shared the last four minutes of speaking time. My garbled two minutes were an attempt at revisiting The Gettysburg Address. I made the reference to government of the people, by the people, for the people.

We may be closer to that goal than we ever have been in our history. Then again we may not.

13 thoughts on “First Day At School”