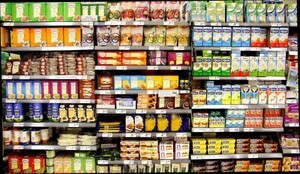 The economy is growing.

So why have Irish living standards barely lifted?

Following on from my recent blog which showed that middle income groups received less than the national share of income than the EU-15 average (due to high income groups taking more) it might be worth having a look at general living standards in comparison with other European countries.

It, therefore, measures consumption not only of goods and services, but public services provided by the government.

‘Although GDP per capita is an important and widely used indicator of countries’ level of economic welfare, (actual individual) consumption per capita may be more useful for comparing the relative welfare of consumers across various countries.’

In short, actual individual consumption can be treated as a proxy for living standards. So what is the relative welfare of consumers (i.e. everyone) across Europe? 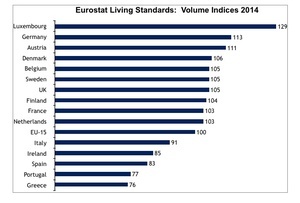 The above graph captures the relationship of real (after inflation) living standards in purchasing power parities between all EU-15 countries and the EU-15 average.

We can see that Ireland is in the bottom half of the table – 15 percent below the average. Our living standards are closer to Greece and Portugal than it is to the EU-15 average and the majority of countries.

Unsurprisingly, our living standards have been falling since we entered the recession. In 2008, Ireland stood at 95 – still below the EU-15 average and most other EU-15 countries; and that was with the wind of an unsustainable boom at our back.

In 2014 our living standards fell relative to the EU-15 average – from 87 to 85. This coincided with all the good new stats.

In 2014, GDP increased by 4.8 percent – as often said, the fastest growing economy in Europe. In 2014, employment increased by 40,000. In 2014, the recovery started. This may help explain that oft-asked question: if the economy is growing, why don’t I feel it?

It should be stressed that this is a relative measurement – relative to the EU-15 average. In real terms (after inflation), Irish actual individual consumption per capita increased, but only slightly, while growth in the EU-15 was far higher. 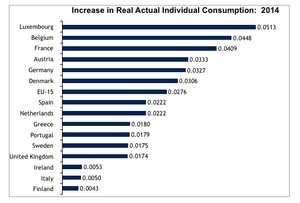 Looking at the two main components – consumer spending and spending on public services – we can see why Ireland trails. These are measured in purchasing power parities.

In 2014 Irish spending on public services was 7.5 percent below the EU-15 average while it was 32.3 percent below the average of our peer group – other small open economies (Austria, Belgium, Denmark, Finland and Sweden). This suggests that we would have to spend €2.4 and €10.5 billion respectively to reach these averages.

There are a number of explanations for this

First, the lack of labour rights in the workplace (e.g. collective bargaining, rights for part-time workers) which depresses wages; and, second, a weak social protection state – one that is characterized by ‘welfare for the poor’ and rather than protecting all those at work through access to affordable public services and income supports.

Another issue is high living costs. One may have a reasonable income but if services like childcare or prescription medicine or public transport are high, people will struggle after expenditure.

One can only hope that 2015 might see an increase in living standards. After all, we had a second year of being the fastest growing economy in the EU and further employment increases.

But we had that in 2014. And we still fell further behind in the living standards stakes.

37 thoughts on “It’s All About Living Standards”