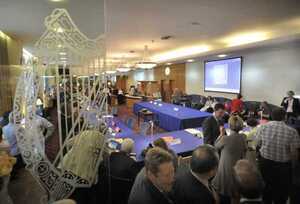 From top: Counting during the seanad election, 2011; Dan Boyle

But it’s our rotten borough.

I’m coming home again to vote in that other election. The rotten borough one. This time I’ll be using my National University vote. It has, at least, the credibility of being the largest electorate and thus potentially the most democratic vote for The Seanad.

Since 1993, with the exception of 2007, I was an elector (one of about one thousand) and sometime candidate on the vocational panels. They are not actual rotten boroughs but they are not far off it.

The petty ‘gift’ giving I miss. The offers of pens, ties, boxes of chocolate, music CDs, mini tricolours, or holidays in Connemara, all unsolicited, made me feel ‘special’. I was never offered the bottles of Jameson, but there were tales of councillors who would put a particular value on their vote.

If the vote buying wasn’t distasteful enough in its own right, the vote swapping has been the most uncomfortable aspect of the Seanad. For smaller parties it’s necessary as it compensates for the lack of proportionality in the system. Votes are maximised. It leads to some very strange bedfellows.

In 1993 The Greens were involved in an arrangement with Democratic Left and the Progressive Democrats. In 2007, having agreed to participate in government, we were obliged to vote with and for Fianna Fáil candidates.

.On other occasions there have been arrangements with Labour and for lower preferences with Sinn Féin. As recently as 2007 Labour and Sinn Féin had an arrangement with each other on vote sharing.

The most frequent vote sharing occurs between Fianna Fáil and Fine Gael. Those parties that can’t be in government together. These have been informal arrangements to ensure that the ‘county’ gets represented. Because of these arrangements, and lower population ratios, a disproportionate number of Senators have tended to come Connaught and from the border counties.

I contested the Seanad on a number of occasions. They were fishing expeditions, attempts to work out the labyrinthine processes. These included five panels with different numbers of seats being contested. There is no reason for this, the Constitution doesn’t specify why the panels shouldn’t have near equal numbers of seats.

The reasons why De Valera developed the vocational panels, and why this formulation has been defined by the Constitution, was that he was a great admirer of the Corporatist system being practiced that time by Dr. Salazar in Portugal.

I enjoyed my time as a Senator better than my being a TD, despite the heightened political circumstances. There was a better, more reflective, type of debate there. There was better scrutiny of legislation.

In 2013 I campaigned strongly for The Seanad to be retained. If and when reformed it has the potential to be the arm of accountability our system of government still sorely lacks.

As for my vote, my precious vote, I’m looking for a context to have it used. That has to be worth at least one bottle of Jameson.

Dan Boyle: The Earth Is On Fire But The World Isn’t On Fire About It

37 thoughts on “A Rotten Borough”