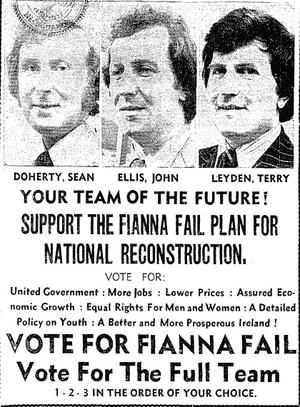 It is time to end the necrophiliac practice of Irish politics [canvassing at funerals].

It diminishes us all.

As the prospect of another election in 2016 slightly recedes, I’d like to give some attention to one of the more distasteful aspects of Irish political campaigning.

A good friend recounted to me the antics of a very successful, and renowned candidate, from the recent general election.

It was his habit to attend as many local funerals as possible, in order to place his colourfully liveried 4 x 4 in front of the funeral cortège to allow for maximum public visibility.

I would have had my own experience of this, if not as blatant. Before my election I would have worked as a community development worker for Muintir na Tire in County Cork.

A high profile, key volunteer with the organisation would have experienced a terrible family event, when a teenage son would have succumbed to cancer. The funeral was a major event in the most remote of rural parishes.

Ten minutes into the funeral mass a local Fianna Fáil TD put into play his well practiced routine. At this time he deliberately and calculatedly entered the church. He walked up the centre aisle looking for the highest available seat. All in the name of maximum visibility. I have despised the man ever since.

A third distasteful incident was listening to the tributes in Dáil Éireann on the death of Sean Doherty, former Cathoirleach of the Seanad, Minister for Justice and TD for Roscommon. He of journalist phone tapping fame, and probably more famous for his Nighthawks TV interview that stuck the final knife in the back of Charlie Haughey.

A Roscommon TD recounted a story to the Dáil that he felt was humorous.

The story concerned the rivalry between Doherty and his Fianna Fáil stablemate, Terry Leyden. The death of a person of status in Roscommon made all public representatives adjust their schedules accordingly.

Sean Doherty managed to attend the funeral. When sympathising with the widow he needed to find out where he stood as regards his rival.

“Has Terry been?” he asked when offering his ‘sympathies’.

“He came to the removal last night Sean,” the widow responded.

Slightly panicking at this answer, he was forced to think on his feet.

“I’m glad. I had asked him to come along,” replied Sean, ‘honour’ thus being retrieved.

Jesus wept I thought as I was listening to this. It elicited laughter in the chamber, but to me it illustrated so many of the things that continue to be wrong with Irish politics.

It has always been thus and will always be thus you might say. I don’t. It is receding and is now more of a rural than an urban preoccupation.

That it exists at all reflects badly on all of us. It is time to end, to bury, this necrophiliac practice of Irish politics. It diminishes us all.

In my public career I had a strict friends, family, neighbours rule in relation to funerals. It probably cost me votes, although I don’t care if it did or not.

Seeing an end to this type of gombeenism is a funeral I would gladly attend.