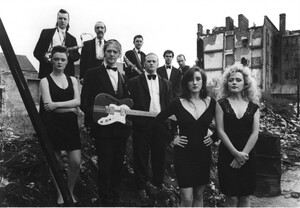 The cast of ‘The Commitments’

We’re wondering if your readers could provide some help. We’re trying to work out where in Dublin that famous “urban wasteland” photo of The Commitments (1991) was taken (above). It’s a still from the film, so there is a little more there, but not enough to be conclusive.

We even tweeted Bronagh Gallagher, [who played Bernie] who is thinking about it, but hasn’t yet got back to us.

Someone said he knows it was in Summerhill [Dublin1]  that Jimmy Rabbitte [actor Robert Arkins] told him.

It’s even been suggested that this cornerstone of Northside zeitgeist is actually on the Southside, near the glass bottle factory. We’d love any useful info your readers have.

Update:Via the office of Alan Parker [director of The Commitments]: ‘Photographer David Appelby {who took the shot] has forwarded  your query about the location of the band photo from The Commitments. According to our files and it was shot in Bond Street, behind the Guinness brewery.“

22 thoughts on “Ask A Broadsheet Reader”