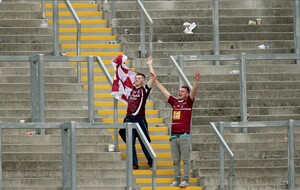 A question as old as time itself.

My favourite day of the year is the day the clocks go forward. No matter how shit the weather is that day, or even if I’m in a hape, or both, no matter what, by 5 in the afternoon I’m like 5 kilos lighter and 15 years younger. I love the surprise coming home from work, or going to training (well, those were the days) and its actually real daylight.

While I’m not a great one for paying attention to the garden, I love the madness that comes into it from that same Sunday. The birdies, the flowers budding even if I don’t know what they are or how they got there, the hedges going from haywire to mangle, the blossom petals gently hiding the dog’s jobs.

It doesn’t matter how ould and senile I get or hungover I could be of a morning, I will always appreciate the season that gate crashes in and signals the end of the Rugby season.

I know we have our National league and club finals, but since I’ve never been involved in a club that got beyond the county boundary with any serious chance, and now only travel to League matches if someone else is driving, which is rare enough these days since most of the lads I’ve knocked around with over the last 25+ years here in Blah Cliath are by now married and under orders or gone back home, so I’ve pretty much given in and handed Winter over to the other crowd.

We come into our own at this time of year. Cheltenham is timed nice for the end of Lambing season, so it keeps us away from the Ireland’s Callers, the League Finals helps us sort out who’s who what’s what and who the danger men are over the coming months, Punchestown and Championship openers, and then it’s all about the hay and the Sundays. (On that note I’ve decided that if we don’t make it to August again this year, I taking up the golf again. There I said it )

So I thought I might just use Frill-Bit this week to reorganise ourselves into the Lads or Goys.

And rather than present the predictable bullet point list i.e. lads have hang and brown sauce in their sangwichs: Goys have parma and pesto in paneenies; I’ve indulged a scenic route generalisation of the cultural differences between us and them.

We’re a Club first and always breed and that will never change. For Goys its school ties, where the vibe is, or who pays more. A Lad’s colours never change whereas the Goy will change theirs according to trends.

We recognise anyone at Rubgy whose roots are firmly outside the Schools scene is a bandwagon passenger or on a free work piss-up.

When it comes to the opposite sex, Lads have a different method for measuring the potential of a harmless knee trembler (Goys might refer to this activity as Bushing which originates from the Wes circuit). “Not the worse looking” versus the now accredited by KPMG no less, K-Scoring with results collated from the testing groups’ Clunge Scales and Roidable ratings.

Yes Clunge is an established asset classification within the Goy sectors. Sur’ layve ‘em at it, whatever gets the job done applies to all walks.

On the other hand, on more long-term arrangements, there was a spell in the 90’s and early naughties were Lads would be required to assess any accompanying Milk Quotas and possible Road Frontage that might come with a potential other half.

However some have reverted back to the standard of their fathers and grandfathers, does the prospect have the gatch to bucket feed calves, and put a daycent feed together at any hour.

These days since the removal of College fees Lads are required to consider other qualifications, such as Dentistry, Teaching, Solicitor, Nursing, and aptly record the income as “fierce handy to have coming in.“

Goys decide on pedigree and parentage, the school connections, how all over the grooming regime covers and would they share their moisturiser. The current vehicle would also be considered in the evaluation, and does she come with a pony and paddock.

Interestingly tho’ Lads and Goys both share the same settling down plan. Both tribes rarely venture beyond their own kind.Both will intend to have their boys and girls reared within the same club/school culture, and most definitely within the same parish.

The big day is a huge event for both sides, but comprise of very different elements.

Lads will not change from the tradition of the Turkey n’ Hang, and the free bar (if possible) insteada wine, fizzy wine, fizzy peach stuff. Goys will go exotic with Monkfish and Cornfed sum’ting or other, and a fully vetted, tested and assessed for knob value wine selection.

A lad’s honeymoon depends on the Club’s progress, but they would definitely manage Listowel, if allowed. Goys will head to where everyone is talking about, for no less than 3 weeks.

By the next Bank Holiday after this, the Munster Championship will have opened up at the end of a week that Lads will have submitted their annual head on the block, searched for the lucky underpants, checked the geansai still fits and stains of last summer aren’t too nasty.

While for Goys, exam Season is offered as the official line on why they’re “keeping it chilled”, but the truth is the credit card needs to be cleared.

They will have talk of heading to Brittas to help open up the holiday homes, check the ribs and outboards, replace the decks and clean the barbeques “Man.” Or, they’ll be letting on their cricket whites need whitening and the bat needs oiling “huh huh!”)

It’s all bollox lemme tell ye. Because in truth Goys are followers, most have no effin interest in spectator sport unless there is a club house that requires jackets involved. “

The Lads will turn up for every sporting event they can get ta or get in ta, from Cards to Darts, Point t’ Points, Dogs, Bowling (the road kind not the Mickie Marbh kind), Golf, Sawker and even the Rugby if it’s a freebie.

I worked with a lad one time that ended up at Silverstone for the British Grand Prix having gone to Celtic the day before, it went like this. (Pure Dundalk head btw)

“Sur you don’t even drive”

Even with the €uros interrupting this season’s run-ups, Lads will land back in Rosslare or Ork mouldy as fuck, and still make their way to the train stations to catch the Specials. And in their rightly colours.

Over the next 4 months Lads will be decorating the gaffs, the cars, the road furniture, contentious boundary lines, walls, sheds and landmarks, with the same two colours and all with same feckless fearless abandon of a dog cocking his leg.

While Goys will be sniggering into their Pimms and Gins at the gaudiness of it all.

I love it when the Lads arrive in Dublin, I love the colours, the banners, the dodgy paint jobs on the cars, the sing songs.Flat caps, Crepe Hats, Sombreros. I even don’t mind with my Flag gets knocked off. It always gets back to me.

Wouldn’t change a bitta’ve it for a rollover win. And remember Goys. We only need one Anthem when our teams line out.