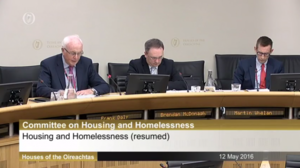 From left: Frank Daly, Brendan McDonagh and Martin Whelan, of Nama, at the Committee on Housing and Homelessness yesterday

During their appearance they discussed hoarding, among other matters.

Brendan McDonagh: “Another message that is being put out is that we are hoarding land and that if we only released more land into the market, the private sector would avail of the opportunity and build.”

“The reality is that since the start of 2014, in 24 months, we have sold land that could deliver 20,000 units into the private sector. We monitor that land to see what is happening with it. Only about 5% of that land is being built on at present. Members ask why the people who bought it did not build on it.

“Infrastructure constraints are certainly there. One of the largest issues – from looking at transcripts, we know the committee has discussed it – is people buying land and effectively looking for a higher rate of return. This has to be a big feature.”

Eoin O’Broin: “We also discussed the issue of land. I am aware that, as in the case of the housing units, NAMA does not own land but holds the debts relating to it. However, in the Fingal area – I am sure Deputy Coppinger will know more about this issue than I – one of the problems facing the local authority is the absence of publicly owned land.”

“As part of the social dividend set out in section 2 of the NAMA Act, could the agency transfer land owned by its debtors to the State, either at no cost or a low cost, for the provision of social housing?”

“Mr [Frank] Daly spoke about special development zones, SDZs, and their benefits. The Clonburris SDZ is the last major parcel of development land in the South Dublin County Council area. The majority of these lands, perhaps two thirds of them, are privately owned. I assume the owners of at least a chunk of this land are debtors of NAMA and have a relationship with the agency.”

“Could innovative ideas that have not yet been discussed in the public domain be brought to bear to maximise the delivery of social units in this SDZ?”

Frank Daly: “Section 10 is very clear in that NAMA has a commercial remit and its objective must be to obtain the best financial return for the State.”

“In our reading of the Act, this is its primary purpose and the one which overrides everything else.”

“That is what drives us but we are also driven by a belief that the debt, whether the €32 billion that we started off with or the €7 billion senior debt we currently hold, is a contingent liability on the State and impacts in a greater sense on the State’s standing in the money markets and its capacity to borrow.”

Ruth Coppinger: “The other issue is the hoarding of land which NAMA has been involved in. It is not just me saying it. The Minister, Deputy Michael Noonan, has said it in replies to parliamentary questions. It was not until 2014 that NAMA started releasing land for housing.”

“Meanwhile, the housing crisis was building up and NAMA had all this land. It is, therefore, about time that there was an honest discussion about the role the previous and current Governments, in setting up NAMA, have played in allowing housing to become very scarce.”

“For example, in a housing forum last month, NAMA said it had sold enough land for 20,500 units since 2014 “in the most sought-after areas of the capital, the commuter counties of Wicklow, Kildare, Meath and Louth and the cities of Cork, Limerick and Galway”.”

“At the height of the housing crisis and in the areas where the crisis is worse, NAMA has sold enough land for those units. By the way, only 1,100 units have been built on that land, indicating developers have been hoarding land while waiting for house prices and profits to rise.”

“That is the key problem. The private sector is in control of housing in this country and it is being facilitated by NAMA as it is currently set up.”

“I would argue NAMA encourages developers to hoard land and it let a housing shortage develop. I do not have time to give all the quotes.”

“However, for example, a report on a freedom of information request in The Irish Independentlast month shows that the Minister for Finance, Deputy Michael Noonan, wrote to NAMA saying it must bring land to market more quickly to stop developers hoarding sites. He went on to say that NAMA was contributing to the problem.”

“Why was that decision taken when even the Minister himself had to intervene?”

“On the social housing spend to date and that projected in the NAMA wind-up, NAMA brags about the €260 million it contributed to social housing but it had a turnover of €34 billion. That is the problem; it is so minuscule.”

“Why has so little been spent on new social housing? I know NAMA’s primary aim is financial return. There seems to be no social element to NAMA whatsoever.”

Daly: “The general point is that it is back to the question about how we interpret our mandate under the Act, the responsibilities we have and what we can do under the Act.”

“I have already spoken about these in response to Deputy Ó Broin’s questions. Short of repeating myself, we have to act in accordance with the mandate and the responsibilities in the NAMA Act.”

“We cannot go outside that. We have to get the best financial return we can for the taxpayer and to do that as expeditiously as possible – that is in the Act as well.
That is a primary driver for us.”

Mick Wallace: “NAMA wrote a letter to the Minister on 28 September 2015, which included the following, “At our meeting with you on 15 September you requested that the NAMA board assess the increased contribution that NAMA could make to residential delivery if it were to be given a new mandate to maximise the delivery of housing in the period to end-2020.” I accept that the Minister for Finance only started to talk about a new mandate in September 2015.”

“NAMA wrote back to him, stating, “During the meeting you stated your endorsement of the board’s objective of redeeming all senior debt by 2018 and the repayment of subordinated debt in March 2020 and you indicated that, in your view, achievement of these senior and subordinated debt repayment targets should take precedence over the provision of funding that would be required for NAMA residential projects in any revised strategy.”

“Am I to understand that NAMA has been strongly dictated to by the Minister for Finance, or am I misreading that?”

Daly: “We are an independent board. Our mandate is the Act. We do engage with the Minister from time to time, and it would be wrong of us not to do so. Generally, we would have a review of our strategy every year.”

“Sometimes he would come along to that and engage with us but at the end of the day the strategy for NAMA, by and large, is that of the board, and we can talk about that right from the beginning.”