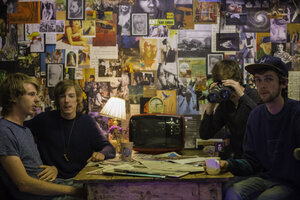 The Shaker Hymn – new single and album now on Spotify

01. Last we saw of this Cork four-piece, they’d released the vid for single Trophy Child and were preparing for their second full-length.

02. The album, Do You Think You’re Clever?, has since been released, and was accompanied by a spate of Irish gigs that culminated in an appearance at last week’s Body and Soul festival.

03. Streaming above is the band’s newest video clip, for single Another One of You. Projected visuals by Colm O’Herlihy.

04. Do You Think You’re Clever? is finally available on Spotify, for those who are so inclined.