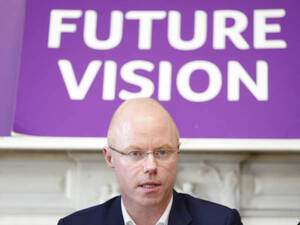 Last week Social Democrats TD Stephen Donnelly raised the case of a family – Sarah, Dominic and their two children – who are being evicted from their home in Kilkenny.

But Is there more to this story?

And less to Mr Donnelly?

But here’s sum’ting else Stephen Donnelly , the Social Democrat that doesn’t wear the purple uniform, didn’t tell us in his Opposition Leaders Questions on July 7, and this is exactly what every County Registrar in the State will ask the Plaintiff Banks and other Institutions seeking Final Orders when they present the Book:

Now, the latter may, and usually is, expanded: “What were the payments like before that?”

And this is where the Sarah’s and Dominic’s filling up the County Registrars Civil Lists lose all hope. (Assuming they even turn up.)

Stephen Donnelly does a bitta’ve a party piece about the €340k mortgage being written down and sold off; what he didn’t supply was the amount in Arrears and the Last Payments. These are actually the facts that define the true nature of Sarah and Dominic mortgage.

Arrears collect interest and charges like an avalanche collects snow; in other words, that arrears value could well have had a runaway snow ball effect that led to the €340k.

Writing down mortgage assets, unless the secured property is impaired, say like flooded, pyrite infected, on someone else’s land, or burnt out, will never happen.

So the real news here is not Sarah and Dominic’s mortgage debt; and SD Stephen Donnelly knew that when he pandered to the masses with this ballad.

Because once Dominic and Sarah’s mortgage is deemed unsustainable, which it has to for Possession Orders against a Family home (or as the banks like to say PPR) to commence, there is nothing stopping them qualifying for the Mortgage to Rent scheme.

Unless they don’t qualify for the Kilkenny County Council Housing List because their income is too high, perhaps, (btw do not read this as an endorsement of the current MTR Scheme.)

But it is my assertion that “Eviction” is bullshit drama queening from the Social Democrat one third leader.

If he was serious about Sarah and Dominic and all those in the same shoes, then why did he do a David Hall Dramatic Society sketch rather than I dunno, investigate if the original Mortgage Contract ever even had a chance of surviving its full term?

Was their Mortgage contract ever sustainable? Like, I’m no legal expert but, if there was no real capacity to fulfil the contract to begin with, surely the contract is a bit dodge anyway. (It smells just like that to me btw.)

Or what about this Write Down? How much of the €200k Negative Equity is behind the answers to my questions and those of the Kilkenny County Registrar, as noted above?

In other words it’s not just the Banks.

Yes there is a Court Review, but the palaver and hoo haa just to get to calling a Creditor’s Meeting that fails the voting threshold, and then onto that Circuit Court merry-go-round is just too time consuming for any decent Professional to even make minimum wage let alone go up against the deep pockets of the Dominant Creditors looking to make a point.

And it is happening daily. That is why Bankruptcy is still the most efficient option.

Insolvency is, in the main, a Financial Process, yet Bruton and his pals have convoluted it into a Legal Labyrinth and Mandatory Compliance Swamp that makes it unrealistic for independent practitioners to stay independent or even full-time.

Many are Financial Advisors who are still selling mortgages and pensions and whatever yer having yerself for commission from the very institutions that are more likely to appear on any creditor list, secured and unsecured; yet fee influence doesn’t seem to bother the regulations.

Independent Professional Practices cannot give the time to a case that won’t return the price of a tank of diesel to the Circuit Court in Tullamore, so they’ve returned to Family Law, Accountancy etc.

Then you’re left with the big boys like Grant Thornton, who would be no stranger to some of the personnel in IBRC, Mars Capitol, etc. Or MABS … g’luck there.

Governments sell assets all the time. Nothing new there lads, sure we even buy them back ffs.

If you ask me Stephan Donnelly One Third Party Leader is as concerned about Sarah and Dominic in much the same way their local Commissioner Phil Hogan probably is.

If Donnelly was really really arsed, he would have elaborated on their financial behaviour and perhaps put into the record that the, what I called the snowball effect on the debt attached to their family home, would suddenly stop when the County Registrar signs that Possession Order and gives them 9 months stay.

How about mentioning that during the 9 months any number of resolutions can be found before any Execution Order is sought, how about recommending a change to this 9 months maximum to say, I dunno, 18 months minimum?

But the Social Democrat One Third Leader didn’t go near all that. What he did was extract some limelight and bundled it all together, like momentum.

The real news story here is the bollockology around the reported profit of the Secured Creditor- a grand? (my hole it is) and to be fair the SD One Third Leader mentioned this along with a call for a Revenue Investigation, but only just. Sur’ I’ve done that meself.

It is my opinion that he has deliberately clouded up this real story with the Ballad of Dominic and Sarah and their “Eviction” for dramatic effect and sticking power.

Why would the ex McKinsey Harvard man do that?

I get accused here all the time of introducing social issues and losing them in my writing style, yet the ex McKinsey Harvard Man did just that; and there wasn’t an effin’ whimper out’ve anyone.

Another Social Democrat One Third Leader gets to stand up about Charities, which ye heard already from me, and the balancing third gets their turn with a certain Ex-Pat, again. I’ve already shouted out for Revenue and CAB officials to step up and use the powers they already have.

What are they at? The Social Democrats? Besides being comical with everyone’s a leader, boring the tits off me, and preaching like busy body Resident Association activists whenever they get a chance.

More importantly, where will they end up?

Stephen Donnelly does not want to be a Social Democrat TD, that’s for sure, he wants sum’ting else and it’s not in Leinster house. Purple might be the girls’ colour but Blue is his game.

Roisin will feck off and join the Ministerial ranks again, and Catherine, arra I dunno, she means well and has gravitas but she’ll never get the gig we need her to do anyway.

So let’s hear it! Will their Purple fade to Grey before the next election?