“Stephen Donnelly T.D. has informed us that he is leaving the Social Democrats.

We are disappointed that he has decided to walk away from the project, we undertook, to establish and build the Party.

The Executive Committee of the Party has reaffirmed its commitment to the vision of a strong economy, fair society and honest politics.

We are fully committed to the project and will endeavour to develop the Party into an exciting force for change in Irish Politics.

As is the case across the globe the defence of social democratic values is not dependent on one personality or politician – but rather is a collective pursuit.

Since the Social Democrats were first founded, in July 2015, we have worked to build the party brick-by-brick. This is a long term project which requires dedication, hard work, long hours and a major commitment from all involved including our elected representatives.

The levels of dedication required for such a major undertaking can be overwhelming for some.

However our elected Councillors, our staff team and our volunteers are passionate about our project and we will now get on with the job of building our party.

We wish Stephen the best in his future endeavours and look forward, with excitement, to the future development of the Social Democrats.”

A statement by the Social Democrats announcing the departure of Stephen Donnelly. 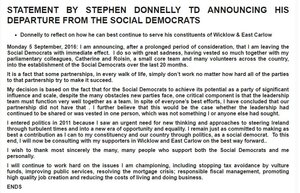