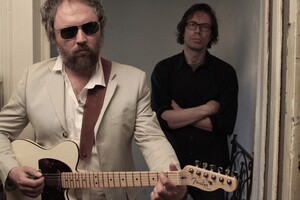 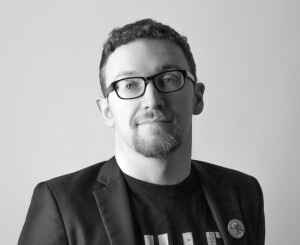 Ken Griffin, guitarist, singer and songwriter, has had somewhat of a renaissance in recent years, with new project August Wells recording and touring regularly.

He had a long shadow to escape, as one of the members of Dublin dream-poppers Rollerskate Skinny, subsequently decamping to New York to form bands like Kid Silver.

With new album Madness is the Mercy out now via FIFA Records, and ahead of the usual host of touring engagements this autumn/winter, Ken has a chat with Mike McGrath-Bryan, who mans the ‘sheet music desk.

Mike McGrath-Bryan: “So, the new album is out now. Give us some insight into writing/assembling the songs, and the recording/other processes of the record.”

Ken Griffin: “I usually have about 30 or 40 songs at different stages of completion at any given time. John and I will work a few days a week on the ones I feel are closest. Then I take them home, complete the lyrics and structures, and write some simple brass and string lines. Half this album was recorded live in a studio called Strange Weather in Brooklyn. The other half was recorded in our own home studio. The live songs were recorded with an eight-piece band, more often than not using the first take.”

Mike: “You’ve worked very closely with Cork-based label FIFA (Frank and Walters, Fight Like Apes, Whipping Boy) since the project’s emergence, how have Eddie (Kiely, label boss) and crew have been to work with?”

Ken: “They have been fantastic. When you work with people like Eddie, who has a great love of our music, it makes you want to work harder in turn for them. It’s been maybe the best experience I have had with someone in the music business in my 25 years of recording.”

Mike: “Your emergence is of particular interest to Irish music followers considering your past endeavours – Rollerskate Skinny, and more. How has the reaction been from longtime fans, gig-goers, press, etc.?”

Mike: “What are your recollections of the time, and what say you to how Rollerskate Skinny is remembered, the all-time Irish lists, reissues, etc.?”

Ken: “It’s nice that people still talk about an album I made 20 years ago. I have no nostalgia about the nineties. As an artist, by the time something comes out, you have usually moved on to the next thing, and the next thing is often somewhat of a reaction to the last thing I have done. It’s always about the excitement of the latest ideas, they are the ones going around and around in my head, being altered and considered and worked on. I am very grateful and moved when anybody anywhere likes my work.”

Mike: “You are now based in New York, where Kid Silver and later August Wells were started. How did the initial change of scenery from Ireland and the UK, to New York change your mindset and creative process to begin with, and does it have an effect now?”

Ken: “It’s hard to quantify, I have lived half my life in New York, and I have now made five albums here. I write as directly from my life as I can, so I suppose my environment then effects the work greatly. When I got here first, I got stolen by the New York night. In a way it was so stimulating, I needed to disappear for a while. Actually maybe I didn’t need to, i just did. I think Rollerskate Skinny’s songs were more fantastical, and the type of writing i wanted to do required more living, more experience, and on a deep level I knew that.”

Mike: “How did yourself and John (Rauchenberger, August Wells collaborator) meet, and how did the project come together?”

Ken: “Through mutual friends. I heard him playing piano, I was intrigued by his unconventional style. We began playing together, and our sound developed very quickly, and there was something unforced and believable about it that satisfied me.”

Mike: Returning to the Irish scene on the regular with the beginning of the August Wells project, how do you think things have changed in the past few decades, what’s stayed the same, and which artists do you like at present?

Ken: There’s so many more venues and festivals to play. You can spend three weeks touring Ireland now. It’s so different for me now, back then, everyone was just chasing after a record deal, and some idea of success. For me now it’s very simple, I really love to play live, I love writing songs, the recording process is and always will be a baffling chore. Nowadays you can do things on a smaller level, far easier than ever before. You can record and release albums without involving a whole army of people. Ireland seems a lot more comfortable with itself, and its been a joy to experience.

Mike: What’s up next for the band now that the record is out?

Ken: “We are planning to tour Italy, Germany and Denmark in October. We are doing a lot of shows around New York, playing a few with Declan O’Rourke, he’s my cousin. Hopefully a couple more tours of Ireland in the next six months. We already have a group of new songs for our next record. We try not to stop, we try to be living, daily working artists.”

August Wells’ new LP, Madness is the Mercy, is available now through the usual digital platforms, with Irish launch shows in the pipeline.

9 thoughts on “Please Allow Me To Introduce Myself”