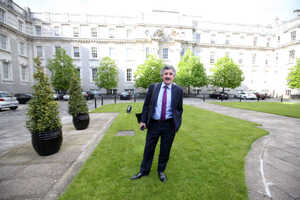 Does John Halligan see his Junior Ministerial title as something that gives him a platform to speak out on issues that matter to him rather than a role coming with explicit responsibilities and duties?

Though he may not realise it: John Halligan’s pronouncements over the weekend may just be a very small part of a world-wide phenomenon.

No, I am not claiming there is global movement to secure a second catheterisation (cath) lab for Waterford. What I am saying however, is that his statements, particularly his most recent ones, contain many of the elements of the decline of public language in politics that we have heard elsewhere.

I accept that Halligan and the local consultants in Waterford hospital are sincere in desperately wanting a second cath lab, but wanting something is not the same as needing it – especially when resources are not unlimited.

For that reason it was agreed as part of the Programme for Government negotiations that an independent clinical expert would be appointed to determine if the second lab was needed.

Halligan agreed to that proposal. The expert was appointed. The expert then produced a report which concludes that services should be improved but that a second cath lab was not necessary.

That is doubtless a bitter pill for Halligan to swallow, made all the more unpleasant from Halligan knowing that he had himself agreed to the process. He staked his local political credibility on the report concluding it would be necessary, indeed he told a local newspaper that it was just a “formality”.

He made a bet and he has lost it – in almost every sense of that phrase.

His response to this predicament of his own making is to take a leaf out of the political playbook of the likes of Brexit campaigner Michael Gove or even Donald Trump and conclude that the people have had enough of experts. So, he lashes out at everyone else threatening to bring all hell (I thought he was an avowed atheist) down on top of this government.

Has it occurred to Halligan or the Halligan-istas that he is potentially guilty of the same base cute-hoor behaviour he has condemned others for in the past?

If the case for Waterford is as strong as he, and the consultants in Waterford, say it is – then shouldn’t that case stand on its merits, rather than be imposed by political blackmail via threats of taking down the government?

As James Lawless, TD, Halligan’s opposite number in Fianna Fáil pointed out this week, Halligan has spoken out on almost every topic under the sun apart from those for which he was given specific responsibility as a Junior Minister: the promotion of science, technology and innovation.

While we all knew Halligan was a junior minister, I suspect that I was not alone in being a bit unsure as to what department he was assigned until Lawless reminded us of it last Friday.

Perhaps Halligan regards his Junior Ministerial title as more honorific than specific: something that gives him an elevated status, a platform from which to speak out on issues that matter to him, rather than a role coming with explicit responsibilities and duties?

To be fair, he would not be the first. Indeed, get outside of Waterford and he would be absolutely lost in the crowd as we can witness from the Brexit campaign and the ongoing US. presidential election.

Facts give way to feelings. Something is true because I feel it is… or, it should be, rather than because it can be independently and impartially verified. Everyone’s motives, bar mine, are suspect. Four legs good, two legs bad.

It is not a new trend, George Orwell was considering it back in the mid-1940s in his essay “Politics and the English Language”. It comes around like a Sine curve every couple of years and seems to be approaching its peak, once again, though this time accelerated and amplified by modern technologies.

A new book entitled: Enough Said, What’s Gone Wrong With the Language of Politics? by New York Times CEO and former BBC Director General, Mark Thompson examines the current slide in political discourse on both sides of the Atlantic.

Unsurprisingly, given the timing, Donald Trump comes in for some attention with Thompson picking up on Trump’s failings as an orator, but also pointing out that his often clumsy staccato delivery masks Trump’s deceptive I-tell-it-like-it-is “anti-rhetoric”, claiming that “This is the way generals and dictators have always spoken to distinguish themselves from the cavilling civilians they mean to sweep aside.”

Thompson also points the finger at Social Media. While I have taken issue with this argument in a previous Broadsheet column, Thompson does expand far beyond the simplistic it’s all Social Media’s fault and looks at other related factors, such as; the increasing number of people who get their news and views from partial online sources: sources which confirm their views and prejudices, rather than challenging them impartially. Score one for the MSM (mainstream media)

So, where does poor John Halligan fit in on this global trend?

Not high, but he is in there: inflated rhetoric; crude threats; convinced he alone is right; certain that everyone on the other side is duplicitous; dismissive of experts. He ticks most of the boxes, while ticking the rest of us off.

Derek Mooney is a communications and public affairs consultant. He previously served as a Ministerial Adviser to the Fianna Fáil led government 2004 – 2010. His column appears here every Monday mid afternoon. Follow Derek on Twitter: @dsmooney