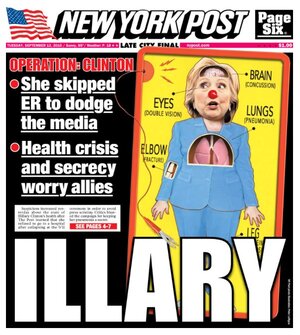 …First, her team says nothing as it sneaks her from the 9/11 ceremony — after she nearly collapses. It later claims she was “overheated” and parades her outside her daughter’s place, where she claims she feels “much better.”

And has the candidate — a possibly infectious pneumonia case — hug a child to make the lie seem cute.

It adds up to hours of effort to deceive — even enlisting federal officers in the effort. That’s the bottom line of The Post’s scoop, thanks to sources who revealed that she was headed to the ER, as Secret Service protocols demand — until her staff insisted otherwise, for fear hospital staff might leak word of her illness.

It seems Team Hillary saw the risk of disclosure as worse than the risk to her health.

Anderson Cooper: “So, let me ask you about that because [Democrat strategist] David Axelrod was very critical of the way that you and your campaign handled sharing your diagnosis with the public. He tweeted: “Antibiotics can take care of pneumonia. What’s the cure for an unhealthy penchant for privacy that repeatedly creates unnecessary problems?” Why not just say on Friday as you said apparently to Senator [Chuck] Schumer on Sunday, you know, “I have pneumonia, folks, I’m going to power through it”? Why keep it a secret?”

Hillary Clinton: “Well, I just didn’t think it was going to be that big a deal. You know, I know Chuck said today he didn’t tell anybody. It’s just the kind of thing that if it happens to you and you’re a busy, active person, you keep moving forward. And, you know, I think it’s fair to say, Anderson, that people know more about me than almost anyone in public life. They’ve got 40 years of my tax returns, tens of thousands of emails, a detailed medical letter report, all kinds of personal details. And, you know, it’s just so — it’s so strange that with all of that information out there, and as soon it became clear I couldn’t power through, we, you know, we said what was going on.”

Hillary Clinton’s response to Anderson Cooper shows she still doesn’t get it on her health scare (The Fix, Washington Post) 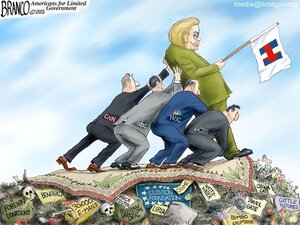