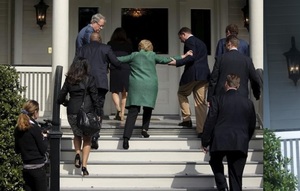 With some choice language the author defends Hillary’s health and skewers ‘unfit Trump’.

Shocking I tell ya. I’m shocked; shocked that common sense and everyday cop-on has departed and gone the way of a Cork All-star.

Shocked that a 68 year old full-time beyond overtime politician, lawyer and granny gets a dose of pneumonia, and is treated and paraded globally onto any screen that’ll have her like a big ticket criminal being perp walked for the news cameras.

FFS lads; Hillary Clinton was fucking knackered. That’s it, that’s all. Christ you’d swear she said build a wall and keep the Mexicans out. Now, to be fair like, she should’a rang in sick anyway; and that’s shocking.

Shocking that this brilliant self-made woman gave more thought to looking over her shoulder at that misogynist blowhard ; yet Agent Orange himself cried off from Vietnam cause he wasn’t fit enough … at 22!

Arra’ would we all just cop on here and find the nearest Yank and kick them up the hole.

And here’s annuder thing with this fucking circus we’re expected to play along with and pay attention to; Trump – not Donald, or Donald Trump; tis Trump.

Everywhere from print to broadcast, from your phones to yere tabets; his title is Trump. Yet for the opposite candidate its Hillary, you don’t hear them say Clinton.

Short memories everywhere on this one, especially since Bill himself had higher poll numbers in the last 6 months of his Presidency that either of the two candidates looking for his job.

She said it herself; “If I want to knock a story off the front page, I just change my hairstyle.”

Here’s anudder Shocker. Imagine if Hillary Clinton accepted the Democratic Nomination with 5 kids from 3 different lads around her on the podium…. America would have shat itself.

I don’t think I’ve seen a more ridiculous, abstract and cowardly election. And that’s saying something.

I think the Agent Orange side have copied what went on here in February; don’t let honesty, truth, accomplishment, substance and credentials near the voting population, and if there’s a media outlet that aren’t under control then buy them out or sue the fucking arses out’ve them.

Land of the free my hole

Wait till the debates and watch Hillary Clinton leave her opponent in tears. Yet still loose. Because they told us she did.

And he said himself “You know, it really doesn’t matter what the media write as long as you’ve got a young, and beautiful, piece of ass.”

Yau see the big problem here with the US Presidential 2016 is that they, those that get to vote, are not afraid of Trump being buddy buddy with Putin, or that ISIS and the like will come up behind them in their Malls and Subways, or that they may actually get a wall between them and Cabo, or the War in Iraq and the War in Afghanistan will have companions in Yemen, Syria whatever yere having yerself. What they the Septics are more afraid of is admitting to how thick and ignorant the majority of Americans are.
And that fact there, is Shocking.

Along with Shocking Literacy levels, Shocking Health Issues, Shocking Poverty, Shocking Greed, Shocking Welfare Failures, Shocking Intolerance, Shocking Obesity, Shocking Gun Laws …. Let there be a pox on all the voters for the Lad (who inherited somewhere between 100mill and 300 mill from his Daddy btw) “The beauty of me is that I am very rich.”

The American dream is about MONEY. Not Freedom.

America, now more than ever, even after Reagan and Bush 1, needs a Liberal Giant. They need someone that has the balls to represent the freedoms and rights and wellbeing of those that cannot afford them, and the too many that are now too afraid to try and seek them.

That name is once again is Clinton.

Do not listen to or tolerate any other argument or case or candidate. America Needs the Clintons back in the White House.

You don’t have to like her, but she’s the only one that can actually walk the fucking talk.

Home of the Brave? “When there are no ceilings, the sky’s the limit.”

We’ll have to wait and see.

54 thoughts on “I’ll Stumble For You”