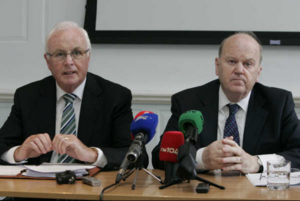 Nama has shrugged off criticism from the State’s most powerful spending watchdog by launching a €3bn loan sale, the Irish Independent has learned.

The State agency pulled the trigger on the massive sale yesterday, just 24 hours after the publication of a highly critical report by the the Comptroller & Auditor General (C&AG) into the agency’s handling of the controversial Project Eagle sale of Northern Ireland loans.

A Nama insider said the sale had been in the works but indicated the timing would signal ‘business as usual’ at the agency which still has a vast portfolio of loans to sell off or work out over its remaining three years.

NAMA launches sale of new portfolio of loans,Project Gem,38 borrowers,€3bn loans linked to 392 properties.It’s as if there was no CAG report

Previously: ‘The Taxpayer Got Full Value For Money’