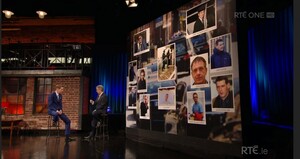 You may recall Irish Independent Crime Correspondent Paul Williams’s appearance on The Late Late Show on February 19 of this year, just a week before the general election on February 26.

In it’s decision, the BAI noted that, although live, the interview had been previously rehearsed and Mr Williams had unexpectedly raised the Special Criminal Court, Sinn Féin and Sinn Féin voters.

In the first instance, the complainant was John Flynn.

[Mr Flynn] objects to an interview with the journalist, Mr Paul Williams, who he claims was freely allowed to malign Sinn Féin voters as criminals.

The complainant believes that in the initial reply he received from RTÉ, the Producer relied on the weak intervention of the presenter and on the hazards of live TV to excuse the failure of the broadcaster to distance itself from Mr Williams’ claim.

The complainant maintains that Mr Williams stated that only people/organisations
opposed to the Special Criminal Court were Sinn Féin members of criminal enterprises.

The complainant states that RTÉ chose not to repudiate the remarks both on the night
and later in reply to the complainant. This was especially repugnant during an election campaign.

In response, the executive producer of The Late Late told Mr Flynn:

RTÉ state that this was a wide ranging and lengthy item that told the story of two criminal families and their vast wealth over a number of years.

The broadcaster states that towards the end of the item, which, for legal and editorial reasons, had been strictly rehearsed and planned in advance, Mr Williams unexpectedly started discussing the Special Criminal Court and his support for its ongoing existence.

The broadcaster states that the presenter attempted to cut him off but Mr Williams continued and made the accusation that the complainant and several others have found offensive. The interview continued about the feuding families thereafter.

RTÉ state that while it is worth noting that Mr Williams did not say that anyone who votes for Sinn Féin is a drug dealer or killer, he did say that the only people who support that part of their manifesto are.

This was unplanned, unscripted and the opinion solely of Mr Williams.

In rejecting the complaint, the BAI concluded:

…Mr Williams’ comments about the position of Sinn Féin in respect of the Special Criminal Court and their proposal to abolish it were factually correct.

From a review of the programme, it was evident that the comments made by the guest concerned the response of some segments of the electorate, in particular those engaging in criminal activities, to this aspect of the election manifesto of Sinn Féin.

While the comments could be reasonably seen as an implied criticism of that aspect of the Sinn Féin manifesto, the Committee did not agree that it amounted to a
comment on supporters of this party as a whole, as stated by the complainant.

While audiences would have benefited from a more forthright response from the presenter to the remarks of his guest, it noted that the presenter quickly stated that the proposals of Sinn Féin in respect of the Special Criminal Court were not relevant to the discussion and also noted that the party, had it been in studio, would disagree with Mr Williams’ analysis.

Given the focus of the discussion, the factual nature of some of the comments in respect of the Special Criminal Court, the response of the presenter, and having also had regard to the right to free expression, the Committee was of the view that, on balance, the programme did not infringe the fairness, objectivity or impartiality requirements of the Broadcasting Act 2009 or the BAI Code of Fairness, Objectivity and Impartiality in News and Current Affairs in the manner stated by the complainant. Accordingly, the complaint has been rejected.

The second complaint was made by Enda Fanning who claimed Mr Williams’ comments were an attempt to harm Sinn Féin in the then forthcoming General Election. He said Sinn Fein was the only political party referred to by Mr Williams in his comments.

RTÉ sent the same response to Mr Fanning as it did to Mr Flynn.

And, in rejecting Mr Fanning’s complaint, the BAI made the same conclusions in its rejection of Mr Flynn’s complaint.

6 thoughts on “Off Script”