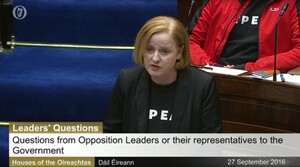 A full transcript of AAA-PBP TD Ruth Coppinger’s exchange in the Dáil concerning the holding of a referendum on the Eighth Amendment [banning abortion in Ireland] with Taoiseach Enda Kenny.

Deputy Ruth Coppinger: “On Saturday the Taoiseach was 50 metres away from an historic demonstration – the 25,000 strong, predominantly youthful March for Choice which took place in Dublin and called for the holding of a referendum to repeal the eighth amendment abortion ban, something he has continually tried to avoid, despite all the polls which show a huge demand for it.

At the end of the protest the Minister for Children and Youth Affairs posited the idea that we might need something to replace the eighth amendment in the Constitution. Does the Taoiseach agree with her and, if so, why?

Why, following the tragedies and the folly of putting something in the Constitution equating a woman with a foetus, would he seriously contemplate putting something else in to police women’s bodies? There is nothing normal about putting anything about abortion or women’s health in a constitution. I am aware of only one other country that has done it. It was done in Chile under the murderous military dictator General Pinochet.

On behalf of women and young people in this country, I ask the Taoiseach not to go there. He has been a Member of the House for 41 years, since 1975.

During that time he has taken part in important decisions affecting women. A total of 165,000 women have had to travel outside the State for an abortion while he has been a Member of the Dáil. Did he give those women a second thought when he was debating these crucial decisions?

In what could be one of his final acts as Taoiseach, I ask him to break a pattern of more than four decades of him being on the more backward, conservative side of all these vital decisions in the Dáil.

He was in the House to vote in favour of the eighth amendment in 1983. Did he have any qualm at all having heard the reservations of the Attorney General at the time and many others? He was here to vote in favour of the “off you go” clauses in 1992 on travel and information and, crucially, was leader of the country when a pivotal event happened when a women needlessly died in a Galway hospital, having asked for and been refused an abortion.

He could have ensured that would never happen again in this country, but that is not the case now. He ignored the pleas of Savita’s parents, for example, to introduce a law to protect women’s health, but rather than repeal the eighth amendment, he chose to criminalise women for having abortions.

Will he, for the first time, listen to and trust women to make these decisions for themselves? Will he agree that it has been proved that the Constitution is not the place in which to decide on these issues and that, ultimately, the church and the State have to stay out of personal decisions?

We all know that there will be a referendum. Will he make sure that it will be to repeal, not amend, the eighth amendment?”

Enda Kenny: “I thank the Deputy. She described the insertion of the amendment in the Constitution as a “tragedy”. Unfortunately, the Constitution belongs to the people. I happened to be in the House to legislate for the first time in 30 years for what the Constitution meant, as interpreted by the Supreme Court. I have listened to the many tragic stories of women in recent times.

That is why it is entirely appropriate that 99 citizens, men and women of different age groups, are coming together from locations around the country to tease out the questions surrounding the eighth amendment, under the chairmanship of the Supreme Court judge, Ms Justice Laffoy, who I am sure will do a first-class job. It is in everybody’s interest that there be a sensitive, rational and comprehensive discussion about this and that is the purpose of the citizens’ assembly.

I am glad its first meeting will take place on 15 October and that everybody, on all sides of an argument that has divided Irish society very bitterly for 30 years or more, can make their contributions and have their say.

When the assembly provides its recommendations the issue will come back here to this House. Depending on the outcome of the recommendations, Members of the Oireachtas will vote according to their conscience on where we proceed from here.

We are having a citizens’ assembly to address the many sensitive issues that have arisen from the stories people are confronted with on a regular basis.

I spoke to some of the people on the march on Saturday and they made their views very clear but there are many divided opinions on this subject and I expect to hear them all over the coming months while the assembly goes about its business. In Ireland in 2016, it is very reasonable to allow people on all sides to make their contribution on an issue that is and always has been divisive.”

Ms Coppinger: “The Taoiseach said he set up the citizens’ assembly to hear stories but we have ample stories and he commented on none of the questions I put about his own role in this House over four decades on these issues. We heard the stories of two women who were travelling and I know they tweeted the Taoiseach, although I do not think he tweeted anything back.”

The Minister for Health offered them tea and sympathy while sending them out of the country and I know the Taoiseach has been tweeted on many issues related to women’s reproductive rights, on which he has refused to comment.

We can win a repeal of the eighth amendment without any further restriction, which is what I fear is being cooked up in the form of restrictive legislation being put into the Constitution or an amendment to the eighth amendment. The Taoiseach keeps denying the results of opinion polls but he has set up a 99-person opinion poll in the form of the citizens’ assembly. All the opinion polls show that 73% of people want a referendum held and 80% believe health is a key issue.

When people talk about “repeal” and wear T-shirts bearing the word, as they did on Saturday, they don’t mean “revoke” or “make null and void”. They do mean “replace” or “amend”. I say this lest there be any confusion on the part of the Taoiseach or among his Ministers. That is what people marched for and that is what they will get.”

Mr Kenny: “I fully respect the view of the Deputy but it is not a black and white situation. The T-shirts may be black and have white writing on them but this is about people and people have different views.

I admire the courage of the 99 who have stepped forward to participate in the discussion. It is not an easy thing for many of them to do, given the nature of the divisive response that can come from participating in something like this.

The hearings will be streamed live and I hope that everybody, at home and abroad, can listen to the conversations and have their views heard. I hope that, under the direction of Ms Justice Laffoy, the recommendations will come back here to the Oireachtas and we can move on from there.” 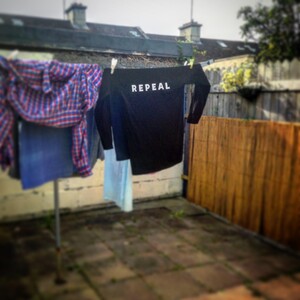 Repeal All About It

88 thoughts on “Been There, Bought The Shirt”