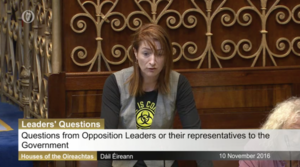 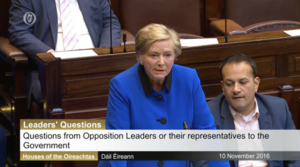 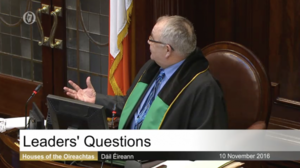 During Leaders’ Questions which were held by Minister for Justice and Tánaiste Frances Fitzgerald.

Independents4Change TD Clare Daly raised the matter of Judge Iarfhlaith O’Neill’s investigation into allegations made by Garda whistleblowers – which is due to be given to Ms Fitzgerald next week – and informed the Dáil that she and fellow TD Mick Wallace have met with six new gardaí who have, or are about to, make further protected disclosures.

During their exchanges, Ceann Comhairle Seán Ó Feargháil interrupted to warn Ms Daly not to make allegations about Garda Commissioner Nóirín O’Sullivan in the Dáil, as to do so would be “inappropriate”.

Readers may recall how Judge O’Neill is investigating protected disclosures which allege that, within the gardai, there was an orchestrated campaign to destroy the reputation of whistleblower Sergeant Maurice McCabe.

Former head of the Garda press office Superintendent David Taylor was one of the people who made such a disclosure and has claimed that he was following orders from senior gardaí.

Readers may also recall how it has been reported that, in February 2015, phones and a laptop belong to Supt Taylor were seized by Garda Commissioner Noirin O’Sullivan’s husband Det Supt James McGowan – two months before Supt Taylor was arrested for allegedly leaking information to a journalist in relation to a Roma child being taken into custody.

In addition, readers may note that, last Sunday, in the Sunday Business Post, Francesa Comyn reported:

Taylor’s solicitors recently wrote to Fitzgerald and Enda Kenny highlighting the “fundamental” need for Taylor’s mobile devices to be handed over to the inquiry for an independent forensic investigation. The court heard that the government has not responded to the letter.

Clare Daly: “Tánaiste, five weeks ago, you referred to very serious protected disclosures from two senior gardai to a retired judge Iarlaith O’Neill for urgent inquiry. Now, the disclosures which allege that the Garda Commissioner Noirin O’Sullivan was directly involved in a systematic and organised campaign to discredit the whistleblower Maurice McCabe, with colleagues, politicians, journalist, were due to be investigated by the former judge who’s due to conclude and report back next week.”

“Now, he was given no powers of compellability, no terms of reference. Attempts made by other whistleblowers to have their cases also heard, as they too are the victims of bullying and harassment since making protected disclosures, were ignored. Despite the fact that their testimony and their experiences are current, they get to the very heart of the systemic problems inside An Garda Siochana, that what’s said in public and done privately are two entirely different things.”

“Now it was hardly an auspicious start to the inquiry, given that was its foundation and you’d be forgiven for thinking actually that it was put together as a fig leaf, maybe for you to take cover behind, for your lack of action in this regard. Now that view has been strengthened but we now we find out that, with a week to go, to the issuing of his report, the former judge has not requested any material from either of the two whistleblowers, he hasn’t met either man. He hasn’t even spoken to either man. In fact, the only interaction, about two weeks ago was a request to their legal teams to pass on the protected disclosure to the Garda Commissioner. You couldn’t make this up.”

“What sort of an inquiry do you honestly expect us to believe that this is because while this has been going on, we’ve had the Garda Commissioner appear at the justice committee, with senior officers who are at the heart of many of the protected disclosure complaints. At the same meeting, the Garda Commissioner misled the committee by stating that she wasn’t privy to information about a campaign of harassment against any member of the force when she was actually in direct receipt of 14 occurrences and letters outlining precisely that situation. She’s been the subject of a detailed section 41 complaint which she’d been briefed on. We’re awaiting the GSOC finding and she’s lost the support of the ranks of that force, by intervening in a partisan way in their legitimate pay claim with her threats of martial law.”

“So, my question to you, Tanaiste, is why have you allowed this situation to continue to the crisis point that it’s at? On what basis do you believe that you have the right to delegate, to retired judges, GSOC and to the courts, functions that are your responsibility in law, namely to hold the Commissioner to account?”

Frances Fitzgerald: “Well I, I would have thought, deputy, that the court of appeal ruling today would have been a solid, a very intense reminder to members of this house that we should take stock and reflect before making allegations here. The good name and reputation, I would say, of all individuals deserves respect and fair procedures. You’re putting on the record various points about a report a judge is currently conducting and is due to report on, next week. You’re saying you have access to details about that. I don’t.”

“This is an independent report by a judge. And as the House is aware, I appointed Judge Iarfhlaith O’Neill to review allegations of wrongdoing set out in some protected disclosures made to me. In addition to reviewing the allegations, Justice O’Neill has been asked to report on his conclusions, it’s a preliminary report and to make any recommendations that he considers necessary in relation to any further action deemed appropriate or warranted. The report, the review has been commenced and he asked, he has been asked to report within six weeks – which will be next week – and I’ve no reason to believe that deadline will not be met. So that’s the situation we’re in. As soon as I receive that report I will consider it very carefully, examine the recommendations that have been made and the Government will decide on future action in relation to the points that you’ve made.”

“I asked Judge O’Neill to do this review because I was very concerned, as I have stated in this house previously, at the content on the material, in the material that I have received and that’s why I decided that should be done. The Garda Commissioner, for her part, has indicated publicly that An Garda Siochana will co-operate fully with any examination of these matters and, you know, how the judge conducts his business during this six weeks, is a matter for him. I would get the report, I will examine the report and will decide on action, I can assure you in relation to the issues that he’s examined. But I’d like to see his recommendations first.”

“This was a first , if you like, a first assessment that it would be extremely useful to ask a judge to examine the first instance, the material that had been, that had been given to me. Now if for any reason, he has concerns about the level of co-operation, during the six weeks, I’ve no doubt that he will make that very clear and I will certainly be reading his report with great interest when I receive it next week.”

Ceann Comhairle: “Deputy Daly, can I say that, generally speaking, it would be my desire to ensure that every leader here had an opportunity, during Leaders’ Questions, to raise matter of important public concern. And you’re doing that. We have absolute privilege here but we should be very, very careful how we use that absolute privilege. And it has been a longstanding precedent that we would not make allegations against people outside the House. You’ve referred to the protected disclosures – that certainly is a matter that is in the public media. But you have made specific allegations about a committee being misled by the Garda Commissioner – I think that’s inappropriate, I don’t think it’s something you should do – it certainly is not something you should now repeat.”

Daly: “I take my responsibility very seriously in that regard, Ceann Comhairle, I can state again very firmly that anything I said was not an allegation at all. It was not a use of privilege, it was details of facts which can be supported by evidence and I’ve no problem in standing over any of those points.”

“The Tánaiste makes the point that it’s up to the judge to carry out the inquiry, as he sees fit. He can only do that within the confines of the powers that he has. Can the Tánaiste confirm to the house that the judge has been given the authority to request the electronic information that supports the allegations at the heart of these matters? Because people’s good names are very important and at the heart of this matter is the muddying and the tarnishing of the good name of Sgt Maurice McCabe and of the horrendous nightmare that is being experiences by members of An Garda Siochana currently, who have made protected disclosures and not just the ones whose names are in the public domain but, subsequent to a lot of this happening, myself and Deputy Wallace have met with a further six serving members of An Garda Siochana who have all either made protected disclosures or are on the verge of doing so.”

“So, what I’m trying to get my head around is: what part of this do you think is normal? And is ok? We have an enormous crisis of confidence inside An Garda Siochana, primarily and largely centred in the role of the Garda Commissioner. The civilian head of An Garda Siochana, GSOC, the courts are investigating these matters – you seem to be okay with delegating your legal responsibility for doing precisely that to other and you won’t get away with it.”

Previously: ‘A Flawed Inquiry From The Very Outset’

‘Dealings With Tusla And Other Garda Whistleblowers’