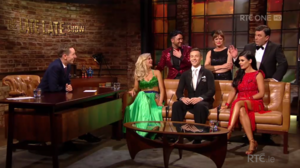 Not to be outdone, the following evening the Ray D’Arcy Show featured an interview with participants in further RTÉ programme, followed by a piece featuring another RTÉ personality.

Is public-service broadcasting now defined as RTÉ people interviewing each other ad nauseam?