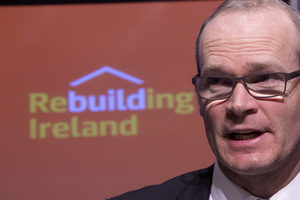 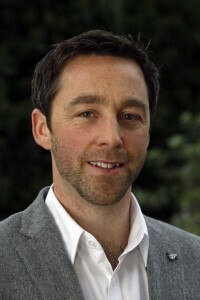 The latest figures included in the government’s Social Housing Status Report and the January 2017 Homeless Figures are frightening, in terms of the worsening housing crisis and the inadequacy of the government’s response to address it.

Dublin City Council will be building just 560 new social housing units in the coming two to three years based on current plans.

While the homeless crisis continues to worsen. There were 7,167 homeless people in January including 4,760 adults and 2,407 children which is the highest number of homelessness on record. Dublin is worst with 3,247 adults and 2,046 children homeless.

According to Focus Ireland 87 families with 151 children became homeless in Dublin in January, which their Director Mike Allen, explained “means that shockingly a child became homeless every five hours in Dublin during the month of January.”

Firstly the plan claims that, “a rich construction pipeline is in place, which will see over 8,430 new social houses being built over the coming years”.

Yet 652 houses of this new ‘pipeline’ are already completed, as they were built last year, and should not be included.

But most worrying is the fact that only a fifth (1,829) of this new pipeline are ‘on site’ already. That means that the majority of the new social houses in the plan will not be built until 2019 or 2020 on current building schedules.

That is no where near sufficient to address the level of housing need. We need at least 10,000 new build social housing units delivered per year.

Unfortunately Rebuilding Ireland and the Department of Housing do not provide aggregate numbers of housing units being delivered by the different organisations and areas.

In order to get a picture of what is happening in reality on the ground in terms of delivery in the key areas of social housing need I have gone through the social housing projects and timelines outlined in the Status Update delivery for the four Dublin Local Authorities and Cork City and created this table below. 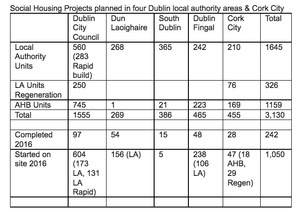 From this we can see that most worryingly only 604 social housing units have started on-site in 2016 in Dublin City, just five in South Dublin and there were no local authority housing units started on site in Cork City last year.

In total just a third of the new social housing units outlined for these key areas started on site in 2016.

These figures also show that a significant proportion (37% across these areas, and 48% in Dublin City) of new social housing units are not being built by local authorities but by ‘Approved Housing Bodies’- housing associations, like Respond, Tuath, Cluid and so on.

The issue here is that it is local authorities are state authority responsible for meeting housing need and that have the capacity to upscale and deliver large numbers of social housing units.

Housing Associations can play an important role in delivery but their capacity is much more limited to provide new units on a large scale. They are not-for-profit (so far) but are private, not state, organisations.

What this table also shows is that in Dublin City, a third of the new build local authority housing units are ‘regeneration’ units. These should not be counted as additional new units as they are replacing existing social housing units in areas such as Dolphin House and O Devaney Gardens where residents are planning to return once building is complete.

Furthermore, we can see from this that while there is a social housing waiting list of almost 20,000 in the capital, Dublin City Council will be building just 560 new social housing units in the coming two to three years based on current plans. Including Voluntary Housing Bodies, this number increases to 1,255.

At that rate it will take at least 30 years to house those on the housing waiting list (that doesn’t include people who become newly homeless, in need of housing etc).

A major reappraisal of financing, delivery mechanisms and time-frame targets are required for social housing delivery if we are to address this crisis.

For example, local authorities should be allocated an additional €500 million to directly build, a new state housing authority should be set up to provide 10,000 mixed income affordable rental housing units per annum, and NAMA should be directed to provide the 20,000 housing units it is planning to build in the coming years for mixed income affordable rental housing.

16 thoughts on “Built To Fail”