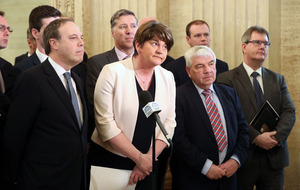 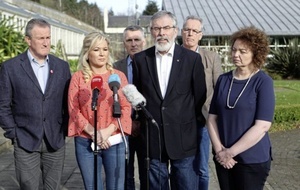 At 4pm today Northern Ireland will once again be pitched into a political vacuum when the Assembly, elected by the people just three weeks ago, fails to nominate a joint First and Deputy First Minister.

As I pointed out in a recent article here it is not that long since the two main parties in the North where proudly boasting about how well they were working together. Exactly 18 weeks ago The Irish News carried a joint article from the then First and Deputy First Minister with the headline: First and Deputy First Minister vow to just ‘get on with the work’ with ‘no gimmicks’.

If only their parties had both stuck to that promise. In that article both the DUP and Sinn Féin presented themselves as the twin pillars of progress and duty, unlike those bold people in the SDLP, UUP and Alliance, saying:

“Our two parties [DUP & SF] are now in an Executive facing in the same direction. We made promises to voters that we will keep – taking on the heavy responsibilities that come with elected office, governing in their best interests, tackling head-on the tough decisions. Others decided to duck the challenges and retreat to the Opposition benches. That is a matter for them…. We are in this for the long haul”

How hollow these words now appear. So, what changed the political landscape to take the DUP and Sinn Féin from working together in an Executive “tackling head-on the tough decisions” to being unable to even sit together?

It came barely eight weeks after the joint article. Addressing a Sinn Féin meeting at the Felons Club in Belfast on January 7th, Gerry Adams catalogued all the issues on which Sinn Féin in government had failed, though this clearly was not how he chose to describe it. Just three days later Martin McGuinness resigned as Deputy First Minister.

The turnabout did not take eight weeks, it took just two and a half – that was the gap between the Felons Club speech and Sinn Féin abstaining on the December 19th vote of No Confidence in Arlene Foster.

Adams used the RHI scandal and the DUP’s inept handling of it to turn the November 21 joint declaration from Foster and McGuinness on its head. He had come to recognise something that voters had already seen – that Sinn Féin in office was not delivering.

Top of his list of failures was the failure to produce a Bill of Rights followed by the absence of an Irish Language Act. There were other issues too; the decision to renege on the Programme for Government commitment on the Long Kesh site; the DUP’s resistance to the legacy and truth recovery mechanisms of the Stormont House agreement; the Red Sky scandal and the Project Eagle debacle.

Remember, Adams was making this speech less than eight weeks after Martin McGuinness had co-written The Irish News article that opened with the line:

Day by day, slowly but surely, politics here is changing. And it’s for the better.

No is wasn’t and no it isn’t. The RHI scandal did not expose the flaws and weaknesses in the DUP/Sinn Féin relationship rather it provided an opportunity for both parties to exploit the crisis and play petty politics to gain advantage over each other. It was game-playing by both, only the DUP showed itself to be a ham-fisted performer.

That said, it took hard line elements in both parties to destroy what little trust was there and so they each have a role and a responsibility to re-establish the trust needed to form an Executive. Another Assembly election will not make this any easier, indeed another election will probably only serve to reward both the DUP and Sinn Féin and

While the slippery road to the last unnecessary Assembly election was paved by the DUP, today’s failure has a few more authors, namely Adams and the British Government with some left over for our own dear government.

Adams’ had no strategic or political interest in resolving this crisis today. This has been his modus operandi for most of his career, well for the latter political portion of it. When things get tough Adams throws all the balls in the air and then lectures others at length about their responsibility to sort it out.

It is what he has been doing for the past few weeks and yet this fact seems to have escaped Arlene Foster and Co., whose continuing response has been to declare that they want a return to the Executive with no pre-conditions, as if the past few weeks have not happened.

There are clearly issues to be resolved, starting with the Irish Language Act and the sensitive area of legacy. To be fair to the DUP these are not areas which they alone can address. The British Government has a great deal of responsibility – but London’s man in Belfast, James Brokenshire appears unwilling to commit and reluctant to engage.

His dithering and hesitancy since his appointment has been as big a contributor to the current impasse as either Foster or Adams. While he may seek out the role of the aloof umpire, he is not – and Dublin needs to firmly remind him of this. Any additional time he intends to provide for further negotiations will be pointless unless he intends to accompany that extra time with some extra engagement and commitments of his own.

The SDLP and Sinn Féin are right that the Irish Language Act was a key commitment in the 2006 St Andrew’s Agreement and it is one signed up to by the DUP, but the commitment was that the British Government would introduce the legislation. Annex B clearly states that:

The [British] Government will introduce an Irish Language Act reflecting on the experience of Wales and Ireland and work with the incoming Executive to enhance and protect the development of the Irish language.

The “incoming Executive” referred to here was the one headed up by Paisley and McGuinness.

The issues around legacy are even more complex. The British government has been using a national security veto to hold up progress on getting at the truth as well as being slow to provide funding for historical inquests.

A report by Pablo De Greiff, the UN special rapporteur, took them to task on both points late last year. It warned against using “national security” as a way of avoiding the UK government’s obligations to provide information about the past and called for the Lord Chief Justice Morgan’s plan on legacy inquests to be resourced and implemented.

But legacy is not an issue for one side alone. The UN special rapporteur cites various estimates of the numbers killed during the Troubles, including an analysis of the 3,593 killings between 1969 and 1998 which suggests that: 422 were killed by the Security Forces, 983 by Loyalist para-militaries and 2,001 by so-called Republican para-militaries.

The Irish Government too must shoulder some blame for its passivity over recent days and weeks. It has been too content to play second fiddle to the British and has lost sight of its responsibilities and its duties as the co-guarantor of the Agreement.

While this current impasse may yet be resolved and we may soon see the institutions up and running, we cannot lose sight of how and why we have again come to this point. The Good Friday Agreement institutions were established to show that politics can work.

At some points, they have succeeded, but the weakness now lies with the bodies charged with operating those institutions: the political parties.

Today they have shown that they are the ones who are not fit for purpose.

20 thoughts on “Dissolution In Place Of Devolution”