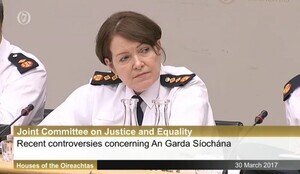 Pressed to offer an explanation as to how the inaccurate recording happened, the Garda Commissioner said it could possibly relate to the fact that checkpoints were designed to be a preventative measure.

“Perhaps it wasn’t as valued as detections“, she told Fianna Fail Deputy Jack Chambers, but said she did not want to detract from the diligent work done by gardai and said the process of establishing the facts was still ongoing.

Deputy Chambers pressed the garda delegation on whether a bonus system paid to senior gardaí could have played a part in the exaggerated figures.

The commissioner said she did not know the details of such a bonus system and agreed to come back to the committee.