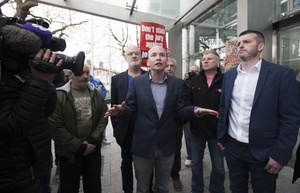 As part of the ongoing 1916 Rising Commemorations, the Fine Gael led government has arranged a special series of ‘Show Trials’ for the entertainment of the masses.

Very kindly, Irish newspapers, journalists and politicians have risen to the challenge of making this experience as close to the original as possible. To quote that memorable Irish Times 1916 editorial:

​‘We said, and we repeat, that the surgeon’s knife of the State must not be stayed “until the whole malignant growth has been removed”… Our demand that the elements of rebellion should be finally extinguished… We have called for the severest punishment of the leaders and responsible agents of the insurrection.’

Exactly as in 1916, the public has been fed a constant stream of vitriol against the defendants and those who support them. Comparisons to ISIS and labels such as ‘Sinister Fringe’ have been spat across the parliament floor in a wholly convincing portrayal of the bloodlust for vengeance which existed among the ruling class and courtiers in 1916.

The Minister for Recreations told us:

“We can’t do military trials, but we appoint the judges and control the jury. We encourage people to come along to the courts where rotten fruit & veg will be provided free of charge to throw at the guilty on their way in and out during the course of the trial. We expect it to be a huge family event”.

In a break with history, it is understood that negotiations are underway with RTÉ and SKY to televise the executions live from Kilmainham Jail where the Garda Band will play a constant loop of ‘God Save the Queen’. Seats are limited and families are advised to book early for what will be the last event in the 1916 Rising Commemorations.

Earlier: Meanwhile, At The Jobstown Trial

For Your Consideration: Jobstown, Protest On Trial

47 thoughts on “Show Trial Of The Century”