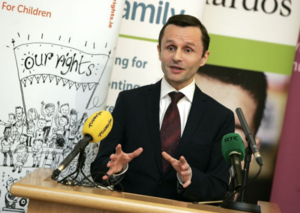 It’s being reported that a report by the Government’s Special Rapporteur on Child Protection Dr Geoffrey Shannon (above) on Ireland’s child protection system – looking at 5,400 cases, from 2008 to 2015, where gardaí removed children from their parents under Section 12 of the Child Care Act – is to be published.

It will be published by Assistant Garda Commissioner John O’Driscoll.

It’s being reported that both Tusla and the gardaí are criticised in the report.

Aoife Hegarty, of RTÉ Investigates, spoke to Audrey Carville on Morning Ireland earlier, ahead of her own report on the matter this evening.

Ms Hegarty said, in addition to a report on Mr Shannon’s examination, she’ll be looking at “disturbing revelations” concerning a boy in the south east of Ireland.

“We’ve been following a number of child protection cases. They include a case that’s currently before the courts in which our child protection services again come under the spotlight. In terms of the actions that the Child Family Agency Tusla has, or indeed hasn’t, taken in terms of vulnerable children.

“We also examine another case which we came across again a child was left in a foster placement, despite allegations of sexual abuse and we’ll show various documentation from that case which we’ve seen and lastly, we’ll feature new revelations on the quality of care provided by child protection services in the south east.

“I suppose by now we’re all well familiar with the very sad story of Grace, that young woman with profound intellectual disabilities who was left in a foster home in the south east for 20 years, despite serious allegations, a woman who was recently awarded over €6million in the High Court.

“But tonight, we reveal yet more disturbing revelations from the Waterford area. This time in relation to the care provided to a young boy. In all, the programme raises very serious questions for our child protection authorities and whether, in all cases, they’re functioning adequately.“

RTÉ Investigates is on RTÉ One at 10.35pm this evening.