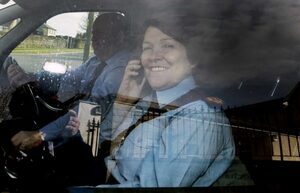 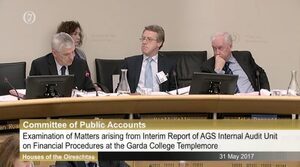 You may recall head of human resources at An Garda Siochana John Barrett.

He was the civilian member of the guards who told Garda Commissioner Noirin O’Sullivan about the financial irregularities at the Garda College in Templemore, Co Tipperary on July 27, 2015.

This is the date Ms O’Sullivan told the PAC, on May 4, that she first heard of the irregularities.

Mr Barrett claims they, and others, discussed the matters for more than two hours. Ms O’Sullivan said they were discussed over a “very brief” meeting while having tea.

You may also recall how, in his notes, of the July 2015 meeting, Mr Barrett maintains he was “counselled to be very careful” when he “referred to the loss of all books of account prior to a date which coincided with the retirement of a restaurant manager”.

In September 2015, Mr Barrett urged Ms O’Sullivan to inform the Minister for Justice Frances Fitzgerald and the Comptroller and Auditor General (C&AG) of his concerns about Templemore but Ms Fitzgerald wasn’t informed until some weeks later.

Several civilian members of An Garda Siochana are before the Public Accounts Committee today.

Mr Kelly, who was the author of Garda College interim audit report on serious financial irregularities at the Garda College, was the only person to give an opening statement to the Public Accounts Committee.

Readers should note documentation sent to the Public Accounts Committee, ahead of today’s meeting, includes a letter which was sent from the executive director of finance Michael Culhane to Noirin O’Sullivan on October 25, 2015, urging her to investigate Mr Barrett.

In relation to this letter…

Catherine Connolly: “As a lay person looking at it, and we have all these reports and they haven’t been acted on, isn’t that right? 2006, I don’t know what happened the 2006 report. But the 2008 [McGee] report made very strong recommendations. Your colleague Mr Kelly says some were acted on, some were reversed and some weren’t acted on at all. Can you stand over that?”

Michael Culhane: “Well, I can’t stand over that because I mean, I can only…”

Culhane: “I can-well in terms of, I can only give advice.”

Connolly: “No, can you stand over that, sorry? Do you accept that the 2008 [report] wasn’t implemented.”

Connolly: “Ok, and that parts of it that were implemented were reversed, that’s what Mr Kelly says clearly in…”

Culhane: “I accept his evaluation.”

Connolly: “You accept that, ok. Have you confidence in your colleague Mr [John] Barrett?”

Culhane: “I accept his professionalism, yes.”

Connolly: “You do. But, at the same time, you’d like him to be examined under the Official Secrecy Act?”

Connolly: “And do you still have concerns?”

Culhane: “Well, given the passage of time, and on reflection, no I don’t.”

Connolly: “Ok, and do you regret doing that?”

Culhane: “I suppose with the benefit of hindsight, it probably wasn’t wise to make that statement.”

John Barrett: “I have asked three times myself personally, four times through my solicitor to have the document that has just been referred to, that was released to your committee [PAC] yesterday, given to me. 85% of the document, that eventually was released under Freedom of Information – consider how this might play – was redacted in protection of the very issues that the Finance Director has now discussed. That reflects the situation in its reality.

“And his correspondence was made available to your committee, I think it’s important that you have it. I discovered the existence of that letter almost a year to the day after it had been written. I think it is appalling that such information and the interesting inversion of trust that was presented to you, appalls me.

We requested legitimately a letter written about me, that I had no knowledge of, that alleges a potential criminal offence, breaks of natural justice, constitutional procedure, none of that existed. And I discover it, yesterday, as being included in the PAC to this committee.”

Sean Fleming (chairman): “Which letter are we referring to?”

Alan Kelly: “Just to clarfiy, you were not aware that this was, it wasn’t provided to you under the requests that you made, but yet it was provided to this committee.”

Barrett: “Yes, sir… I wrote directly, myself, when I became aware this letter existed, I asked for a copy…I wrote to the Commissioner three times to the best of my knowledge.” 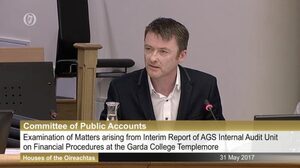 Culhane: “There’s a lot of working parts in the report and, indeed, in the operation of An Garda Siochana. So, I suppose, by summary of views that I had in terms of the contents of the report, and I again, you’ve said it several times before, but I mean there was a history there, which, in relation to the college which wasn’t adequately explained.”

Cullinane: “Do you believe, one final question: And I want to put this to Mr Kelly and Mr Barrett, do you believe, Mr Kelly, when that letter was written and when Mr Culhane said your report was unprofessional, misleading and mischievous and he went further and asked you to amend your report, did you see that as a direct interference in your report and an attempt to get you to either water down or lessen the content of your report?”

Cullinane: “Yes. And did you have a similar experience, Mr Barrett?”

Barrett: “With respect to the letter of October 15, I never saw the letter until yesterday.”

Cullinane: “But now that you’ve seen it, would you see that as an attempt to undermine…”

Barrett: “Absolutely, very deliberate collaring of what I felt was my obligation to deal and illuminate these matters which have long since been left to continue.”

Cullinane: “And do you now see that as serious, Mr Culhane, that we have the head of internal audit and we have the head of human resources, both seeing it in the same way that I can, that you tried to undermine their work. We talked earlier about the circling of the wagons, about, you said it yourself, things should be kept inhouse, do you not see that you are part of the problem? And that you, by what you’ve put in writing and we’ve heard from two senior people, in civilian roles in An Garda Siochana, they felt you were trying to interfere with their work.”

Culhane: “I don’t see, I don’t see myself as being part of the problem. I think I see myself as being part of the solution because of the actions that I have taken on the issues identified in the 2008 report. I had no desire to undermine the professionalism of these two gentlemen. Niall Kelly is an independent auditor and he produces his reports without any, in terms of, without any need for any reference to me. So, I don’t see that I’d be interfering with his independence.”

Cullinane: “You tried to get him to alter his report. You threatened him with legal action. You said if he did not amend his reports, you would seek legal advice and you would take legal action and you’re sitting there telling me that you did not try to interfere with the work of internal audit. It’s incredible for you to say that. How could you threaten legal action against the head of internal audit, almost unprecedented, and then say ‘that wasn’t an attempt by me to interfere with the work’. You cannot say that Mr Culhane.”

Fleming: “Mr Culhane, today, in front of the PAC, do you still stand over that sentence: “in omitting these acts, the report is unprofessional, misleading and mischievous” today, the 31st of May 2017, would you agree with that today?”

Culhane: “On reflection, chairman, I probably, it was an unwise use of those words.”

Fleming: “Because before the committee, that statement is in writing before this committee.”

Culhane: “Yes I would like to withdraw it yes..”

Fleming: “You’ll withdraw that statement then?” 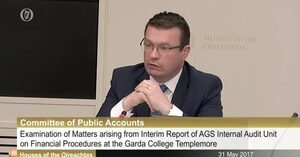 Barrett: “…in the period that had elapsed from July [2015] when I originally prepared a report to go to Mr [Michael] Howard, through Mr [Cyril] Dunne, and we’re reaching now into the third week of September and I have concerns that the thing is not being treated in the multi-million off-balance sheet as Michael Culhane described it activity that is continuing. It is an active, ongoing enterprise within an organisation that I have line responsibility for. And so, in setting it out very clearly, I do go through the very specific issues that Fennelly raises in relation to what a Section 41[which provides that anything of significant relevance should be brought to the attention of the Minister for Justice] is intended to do and how it is that this applies absolutely to the matters of gravity that I dealt with in my report of the 6th of July. And I was very deliberately putting it on the record.”

Alan Kelly: “How would you see Mr [Cyril] Dunn reacted?”

Barrett: “I think that question could be better put to Mr Dunne but…”

Kelly: “Of course, but I want your opinion.”

Barrett: “My opinion is that we were at that point into a situation where the past history that I’d become aware of was repeating itself, as in the 2008 report, nothing was done, it continued. I felt there was a danger, quite frankly that my report of July 2015 was going to go the way of its predecessors.” 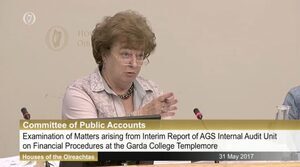 Catherine Murphy: “Another thing that strikes me, I’d like to clear a few of these things first, one thing that strikes me is: the idea that you were keeping contemporaneous notes, that you were referencing some of your meetings with Mr [head of legal affairs Ken] Ruane, the idea that the internal auditor [Niall Kelly] is sending himself registered, it is yourself Mr Kelly...?”

Murphy: “I mean that strikes me as a self protection mechanism. Would that be correct?”

Barrett: “Let’s look at what we’ve recently read in our newspapers, concerning whether records were destroyed or whether telecommunications equipment survived. I was very conscious of the fact is that what I was dealing with here was well known, understood for a number of years and the curiosity in my mind was why was this not dealt with expeditiously?”

12 thoughts on “What’s Another Smear”