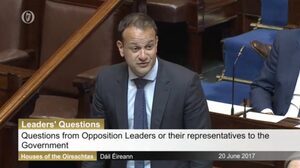 “This was an insider appointment that stinks to high heaven,” declares @MichealMartinTD. #Dail LQs:

#Dail LQs: Martin says the instruction to Aras to appoint Whelan on Monday was designed “to pre-empt accountability from your own cabinet”

#Dail LQs: Martin wants to know when Leo was told of Whelan’s nomination; “would you do this all over again?”

#Dail LQs: Varadkar says he was aware of the possibility of Whelan being nominated to the role the “evening before” last week’s Cabinet

In his first Leaders’ Questions.

Taoiseach Leo Varadkar responds to questions about the appointment of former Attorney General Máire Whelan to the Court of Appeal.

Labour leader Brendan Howlin claimed a payment made to Fine Gael TD Regina Doherty was in breach of legislation.

“Taoiseach, last week, you unveiled your new Cabinet. It included  an unprecedented number of ministers of state with the right to attend at Cabinet. Within 24 hours, it emerged that one of these four ministers could not receive the corresponding allowance without a change in the law….

“Over the weekend, the situation got worse. It has now emerged that a payment of a a third such allowance to the Government chief whip [Regina Doherty] from last year was also unlawful.

“This means that you cannot pay such an allowance to the new Government chief whip. It also means that an illegal overpayment has been made to Minster Doherty.

30 thoughts on “Meanwhile, In The Dáil”