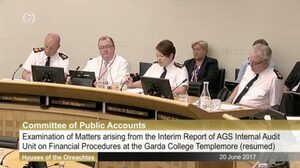 “In 2016, when allegations of a smear campaign against Sgt Maurice McCabe emerged, the spend by the force with the Communications Clinic, owned by Terry Prone, jumped from €10,400 to €92,995, according to figures obtained by the Irish Examiner.

Garda sources denied that the money primarily went on Ms O’Sullivan and senior officers, insisting it mainly went on training superintendents who deal with the media. However, senior officers who appear before Oireachtas committees do receive training in advance of hearings.

In response to a parliamentary question from Ms Murphy, Justice Minister Charlie Flanagan said his officials spent €27,313 with the Communications Clinic between 2014 and 2016.”

We Need To Talk About The Guards